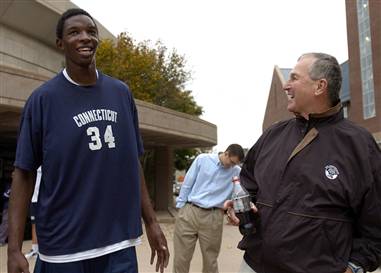 From the moment he met Thabeet, Coach Cal knew the Tanzanian center could be really tall.

Although his defense has always been top-notch, Hasheem Thabeet -- or as my dad calls him, "Theebz" -- has faced almost three season's worth of criticism for his Flubber hands and lack of strength and positioning in the blocks.

But today, Theebz was vindicated a little bit, as the junior was named First Team All-Big East by the conference's coaches. After three years and a lot of Coach Cal tough love, Thabeet has now upgraded to Jello hands (a firmer goo), is still pretty weak and for some reason still puts the ball on the floor instead of bunny hopping to dunk it, BUT also has a serviceable enough offense with which he can pick up a solid 13.6 ppg in between smiting everyone on D.

Even though I think most would consider Thabeet the conference's best player, and some one of the best in the nation, the big fella was not a unanimous selection. The only one to receive that honor was Pitt's DeJuan Blair. But that's not too big a deal. I'm sure Rick Pitino was too busy pressing his all-white suit to give the ballot a thorough look-over.

A.J. Price was also named to the second team, Jeff Adrien the third, and Kemba Runner was an all-rookie pick.

I'm pretty satisfied with where the UConn players landed, and with the list in general. Pretty fair, in my opinion.