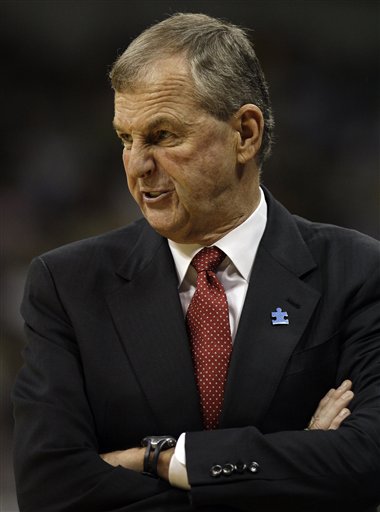 Coach Cal is either really mad that UConn played like ish or is really good at impersonating a chipmunk.

I can't envision a worse way to lose. I would have rather been blown out.

Instead, the Huskies had their worst performance this year, played with my emotions by pulling within two (thanks in large part to Pitt taking an afternoon nap, or something) and then, with the game right there for the taking, proceeded to let Pitt and their less-than-svelte physiques stomp all over them.

And this time you can't even use the excuse that DeJuan Blair is just Thabeet's kryptonite. There was some of that, sure. But that certainly wasn't the story this time.

Instead, it was Sam Young pump-faking the entire team and scoring like it was shootaround.

And instead of making excuses, now we're asking questions with a whole lot of punctuation.

And most importantly, "What the hell happened to this team today, and where do we go from here?!"

Pitt definitely has the perfect roster to expose all of UConn's weaknesses. I get that. And I get that, as Meacham mentioned in the liveblog, Pitt will probably get tossed out in the Sweet 16 by a team that can shoot the 3 (see Friars, Providence) while the Huskies still have a chance to go deep into the NCAA Tournament -- just as long as they don't see another team like Pitt.

But that still doesn't make me feel any better about this game, this team and our chances of cashing in on another Coach Cal five-year plan.

I'm aware this is a wild overreaction (I've admitted as much among the zany tags). But, damn, that sucked so much.

Everybody, do yourself a favor and watch the women's team blow out a few teams by 40 in the Big East tournament. I think we can all use a nice pick-me-up.