Others tell Maya Moore she is good at basketball

Share All sharing options for: Others tell Maya Moore she is good at basketball 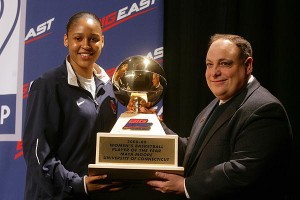 Congratulations are once again in order for Maya Moore, the LeBron James of women's basketball. She was named Big East Player of the Year for the second straight time. In case you were unaware, Moore is a sophomore.

I'm going to go out on a limb and say that no one has ever won four Big East PotY awards (or four in any other conference). Thus, Maya Moore is a trailblazer. By which I mean she could play for the Trailblazers.

Congrats also to Geno Auriemma, named Big East co-Coach of the Year (with Villanova's Harry Perretta, a longtime Geno pal from their days growing up in Philly), although I suspect that it's rather easy to coach a team with the best point guard, small forward and center in America.