Share All sharing options for: Levance is fat: #1 UConn vs. #4 Pittsburgh preview 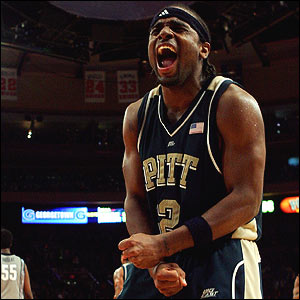 The round mound of passing and streaky shooting.

Make sure you join TheUConnBlog for its third TheLiveBlog for tomorrow's regular season finale. Tip-off is noon, so I'm guessing that's when Porter will have it set up. We'll be arguing calls, figuring out how many Nobel Prizes Kemba Walker should win, and mocking each other in the grand tradition of insufferable New England sports fans. Should be fun. But first, since it's far too late for me to write a meaningful 1,000-word preview, enjoy this brief look at Saturday's big showdown. (3% more substantitve than the poodle preview!)

--Hasheem Thabeet is big and awesome. When he met DeJuan Blair a few weeks ago, though, the latter was big and awesomer. Saturday, Hasheem, like Daniel-San, will need to learn to confront bullies with full force. UConn will have a great shot to win if Thabeet either a) makes some shots or b) gets Blair in foul trouble early and often.

--The title of this post, taken from the best sign in the XL Center crowd at the Feb. 16 loss to Pitt, reflects the fact that Mr. Fields, Pitt's leader, is listed as questionable, according to the Courant. But it's his senior day, and besides, he played the last 9 minutes of the Marquette game following the injury. This is just a chance to give CBS' top announcing duo (IMO), Bill Raftery and Verne Lundquist, a chance to praise the kid for his heart. And his moobs.

--I quite dislike Pitt, their fans, and their coach's hair. But they are damn good. They are an efficient machine on offense and, if the refs allow, unstoppably physical on defense.

That poses a problem for UConn, which gets 25% of its points from the free-throw line but is averaging five fewer free throws per game since Jerome Dyson. I still worry about the offense's ability to score in the halfcourt, especially since Blair shut down Thabeet and Adrien had an off night last time they played.

--Rumor has it that Scottie Haralson is getting more time with the first-team in practice. I approve. We are getting close to the time where Raftery will have to grant him an ill-conceived nickname, like Dagger Man. I vote for "Scottie 3 Hottie".

--In the event UConn were to somehow lose, we'll hear yet more about the tired old canard that nobody wants the No. 1 ranking in the poll. Let's just keep in mind that, in this scenario, UConn would have lost its No. 1 ranking to the No. 4 team twice. UNC (Boston College), Wake Forest (Virginia Tech), Pitt (second time, Providence) and would-be No. 1 Oklahoma (Texas) all lost to considerably wussier teams.

I'm just saying, maybe if UConn played in the Big 12, or Conference USA, they'd be able to rack up gaudy W-L records and stay at the top of the polls like Memphis or Oklahoma. (What was my point, again?)

Prediction: UConn probably could have won the two teams' last meeting. They certainly should have a chance, being the best road team (according to W-L record) in the country. That being said, I am nowhere near bold enough to predict a UConn victory here. The game's probably a toss-up, and whoever comes out of the gate with an early lead will probably win.

The Big East title is important and all, but pretty much any outcome that results in UConn making it to New York City next week in full health (well, minus the Dyson thing) is a good thing.

Which means that Louisville could/will steal the top seed in the Big East tournament.

Still, enjoy the game - gotta love a big game like this.

Remember to join us for the liveblog, and go Huskies.