Share All sharing options for: Those blows to the head have apparently knocked some unbridled optimism into Zach Frazer 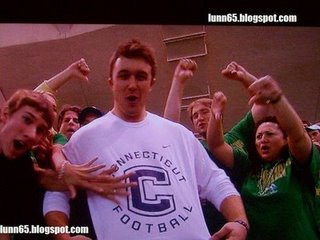 Zach Frazer may regret this move in the near future.

While most of us have been stuck in a state of basketball bliss -- basketbliss, if you will - it's important to remind everyone that spring football practice is right around the corner (starting March 17).

Like most UConn fans, we here at TheUConnBlog like to pretend our football program matters. And our misguided enthusiasm for the sport has only gotten worse the past two years or so. (I blame the recent crop of draft prospects. Damn successful kids ... with their respectable 40 times and their rap music.)

Well, while we were all engrossed in taking names on the hardwood, a few football articles popped up. Most of which center around the fact that Andre Dixon is finally back on the wagon -- or is it off the wagon? -- and he and Jordan Todman are ready to scoop up all the crumbs left from Don Juan Brown.

"I'll bet he is hungry," Dixon said. "Jordan is good. I'll bet Robbie Frey and some of the other guys here are hungry, and the new guys coming in will probably be hungry, too, for sure."

For only 10 cents a day, you could help give a UConn running back all the carries he needs...

"But guess what? I'm hungry, too," Dixon continued. "Don't leave me out of the group because for me to sit there last year and watch somebody else do what I could have been doing, yeah, it has made me hungrier, yes. Don't get me wrong. I was happy for Don. I really was. I'm a team player but to not be doing it myself, it makes me a little bit sad and little bit disappointed in myself."

With The Donald soon to be flush with ham sandwiches in the NFL, it seems as though the collective malnourishment of the remaining running backs will limit the dropoff in production. I'm not too concerned either way. Randy Edsall could cast the top half of the depth chart to the waiver wire in a Coach Cal-esque move and they'd still be fine.

The situation at QB, however, doesn't appear to be as secure.

With noodle-armed Tyler Lorenzen now out of the picture, spring practice will be the beginning of what could be a five-month battle for the starting spot.

I think based on the sheer excitement factor, everyone would like to see Zach Frazer, the four-star former Notre Dame player, claim the role. Frazer would like to let you know he concurs.

He recently gushed about the new offense, and speaks as if he's already been given the first-string job.

"It's up-tempo, just high-scoring, it's going to get the fans into it and it's going to be exciting," Zach said, "When we win, we're going to kill them. I don't think we'll even lose with this offense. We're going to get things going, everyone is going to be motivated. Already people on the team are excited, the wideouts are excited. We're going to prove the people wrong who say we can't throw the ball and can't catch. We're tired of it and we're tired of people saying, 'Oh you're UConn, what's the basketball score, you know?' We're tired of that now. They think now that Don Brown is gone that's it, too. Don was great here. He left his tradition and I loved playing with him but now it's a new offense, new coach and a new year. We're ready to go."

Whoa, what's going on with all the positivity? Has Coach Cal been renting Stanley Robinson out to the football as a motivational speaker?

But in all seriousness, Zach, we appreciate the optimism and everything, but it's probably not a good idea to start making claims in March when you're not even the starter yet. It just won't look too good if you end up pulling another Pitt this season. "A" for effort, though!

Frazer also went more in-depth about the changes new offensive coordinator Joe Moorhead will bring with his new attack, which has become somewhat of a mystery since he was first hired.

"No huddle, we'll be spread out in a lot of different formations. It will definitely keep the defense on its toes. I'm trying to think of one word that would describe it but it's like what Texas Tech and Missouri ran, along those lines. It'll take some time getting used to but once we get used to it, it's like bam, all day, everyday. It's not that hard to pick up. I find it very exciting to learn. It's kind of boring sitting back as player and you just look at the offense like, you're running left, you're running right... ok. But when everybody is spread out, you got different formations, different plays, different routes, it keeps everyone excited, everyone into it. I think we'll learn it really quick. We'll pick it up well, man, and so far, so good."

I'm still trying to wrap my head around this one: In about two months, we've gone from running the inside-draw system, to a multiple hurry-up, to now a full spread a la Texas Tech?

OK, someone needs to explain to this Moorhead guy that this progressive junk isn't going to fly here. Half on the campus' population is still made up of cows, so I don't know if Edsall can handle all these big-city ideas Moorhead conjured up in Akron.

Frazer, though, sounds like a kid hopped up on sugar before bedtime, so the new offense should at least add some excitement. And judging from the bright-eyed enthusiasm Moorhead exudes, things look quite promising.

It took Edsall almost two years to explain the forward pass to Rob Ambrose, so Moorhead is already way ahead of the curve.

I, for one, am quite pleased with all this talk of spreads and hurry-up. Not only will it make all games watchable past the third quarter, but it could also balance out some of the problems and inexperience the offense has heading into the season; just look what a spread did for Cincinnati.

So in closing, I'm pumped. Who's with me?