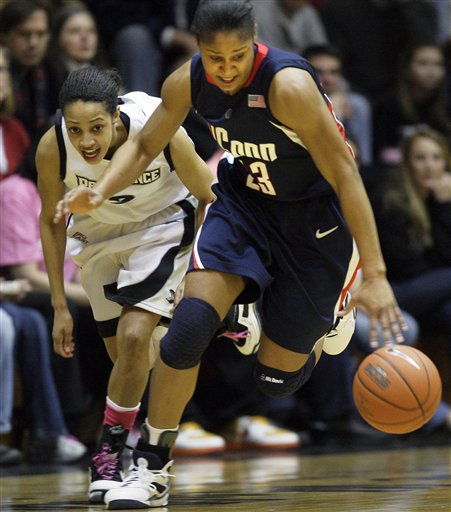 Maya Moore requests you give her the ball. It's just easier for you this way.

As the blog's ambassador of women's basketball, I feel as if the UConn
women have gotten short shrift. After all, both basketball teams are ranked No. 1 in today's polls, and while the two teams have combined for a 56-2 record this year (.965 winning percentage), the men are barely pulling their weight with a .931 winning percentage.

So take heed: the ladies are 29-0 heading into tonight's nationally
televised regular season finale at Rutgers (7:30 p.m., ESPN2), and a win against the Scarlet Knights will give the Huskies their fifth undefeated regular season in school history.

Plus, it's another chance for the Huskies to humble the fine residents of New Jersey (myself included, though I'll be objective-ing it up on press row at the RAC). Rutgers is 18-10 and could use the win to bolster a fairly shaky NCAA Tournament resume, but nuh uh.

The only other school be undefeated through the regular season more than once is Vermont (wha?) in 1992 and 1993. Mighty Tennessee, currently floundering in the lower ranks of the polls, has only done it once.

In case you're wondering, here's what happened each of the previous four times UConn went undefeated prior to the postseason:

So since it's a snow day and honestly, you have nothing better to do, turn on the tube and watch the Huskies chase a perfect regular season (and their second undefeated Big East campaign in three seasons).

After that, I promise we'll have Pittsburgh Hate Day or Two, or something.