Share All sharing options for: Post-game reactions: Coach Cal gets 800, Price my heart 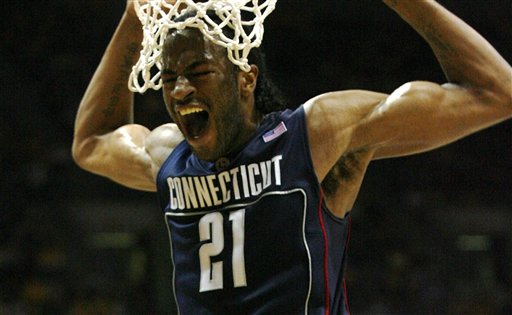 No. 2 UConn's 93-82 win over No. 8 Marquette was probably the most entertaining and fulfilling game this season.

There's so much that is first-pump-worthy from this one: Coach Cal got his 800th win, A.J. Price scored a career-high 36 and had probably his best performance all season, Stanley Robinson decided to show up (19 points, 10 boards) and screamed a whole lot, and UConn (24-2, 14-2 Big East) put itself in good position to reclaim its No. 1 ranking, barring a meltdown vs. Notre Dame Saturday (Jinx! Jinx! Jinx!).

After the game, Calhoun was just as pleased:

"We've had teams that have maybe had more names, in some ways," Calhoun said (somehow without mentioned either of his championship teams). "But this team is getting to be pretty good. A performance like tonight gives you a hint that we can really do some special things."

More observations from the game after the jump

I went through most of this already, but here are a few other things that went well:

A great win, but still a few nits to pick:

Marquette guards James, Jerel McNeal and Wesley Matthews have been in sync for the past four years, but when it comes to singing, the group needs work. In a pregame video, the three guards, along with fellow senior Dwight Burke, sang their rendition of Boyz II Men's "End of the Road," possibly in preparation for Senior Day. Let's just say their play is easier on the eyes than their singing is on the ears.