UConn gets by with a little help from its friends enemies

Share All sharing options for: UConn gets by with a little help from its friends enemies 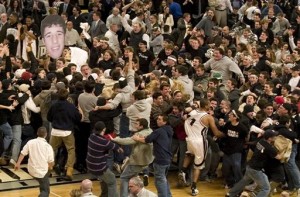 Fun fact: Rhode Island is so small, some of these students are actually standing in Massachusetts.

The FriarBlog is in ecstasy tonight. You've probably heard by now, but: Providence 81, No. 1 Pittsburgh 73. As you can see above (and in the link), Providence fans are happy, because their seniors got a huge win on Senior Night, and the Friars likely punched their NCAA Tournament ticket tonight. Good for the conference, good for the Snuggie, and good for them.

UConn fans are not happy for Providence fans per se, because we hate them and their team. Hence why we enjoyed pounding them in Gampel last month. But UConn fans are happy that Pittsburgh has choked away its second No. 1 ranking this year in spectacular, down-by-20-points-to-friggin-Providence fashion.

Fans at Tuesday's UConn women's basketball game made the most noise they made all night when the score was announced. It was kind of touching.

Yes, our nation's three-day-long nightmare of rewarding football-on-hardwood is over.

The last time UConn was sitting in the No. 2 slot in the national polls and No. 1 lost, we called for UConn's immediate ascension to No. 1. We will not make that call tonight, for several reasons:

1) We kind of respect Pittsburgh as a program, though they've had even less March success than Duke recently.

2) Playing with that bullseye on your chest can't be much fun.

3) And finally, there's no guarantee UConn will make it to Monday unscathed. If - and it's a rather big if, frankly - UConn can pull off a couple of more-difficult-than-they-seem victories (tonight against Marquette and Saturday against resurgent Notre Dame), the Huskies will rightfully take back their spot high above the college basketball landscape.

But personally, I'm not going to bet on it. It's more likely that UConn takes a tumble some time this week, allowing some nancy-boy ACC team to grab the top spot. Then again, I also picked UConn to lose to Notre Dame a month ago, so what do I know?

But tonight, I recognize that I am currently living in a part of the country that shines when it is asked to raise oneself by lowering another ("Patriots' victory parade? Why yes, I think I will chant 'Yankees suck!'"). Thus, we here at TheUConnBlog would like to say, to Pittsburgh: nyah, nyah.