Other Brown more of a liverwurst

Share All sharing options for: Other Brown more of a liverwurst 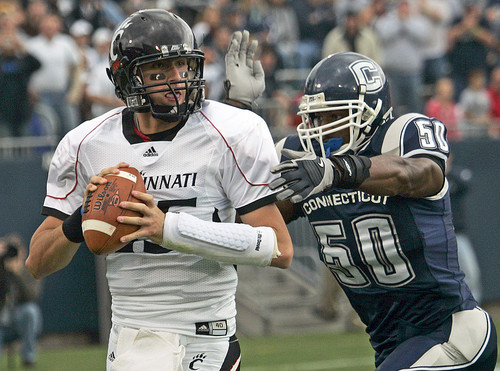 Whenever you've Googled "types of deli meats" twice in two days, you know it's a pretty good week.

And when you find several top-notch online deli suppliers as a result, that's really the bee's knees.

Speaking of the NFL combine, the other, moderately-less-talented-but-still-pretty-good Brown, Cody Brown, was the latest UConnite to parade around in compression shorts. (Insert obligatory Mike Singletary joke. Pause for yucks).

After posting 11 sacks and five force fumbles last season, Brown emerged as one of, if not the best edge rusher in the Big East. Brown is extremely athletic, but at 244 pounds, he's too slight to be a pro end and is projected as a 3-4 rush linebacker. In an event based on gauging athleticism, Brown was expected to do well, and he did.

As Madden has taught me, the 40 is the only thing that matters because it's really cool. Brown's 40 placed in the top 10 among ends, but almost every DE that ran faster than him projects as a 3-4 rush linebacker (except for maybe Georgia Tech's Michael Johnson). And if you throw in other linebackers that can play outside in the 3-4, such as Aaron Curry, Brian Cushing, Clay Matthews, etc., it's probably more accurate to say he's about the 10th-15th fastest rush linebacker, which has really transformed into its own position the past five seasons.

Still, he placed highly in a bunch of categories, and his 3-cone -- which is said to be really important for rushers because it basically simulates running around a tackle off the edge -- was pretty good.

UPDATE: To back my position with someone who knows what he's talking about, T-Mc lists Brown as having the ninth-best performance of the hybrid DE/LBs (the list comes toward the bottom). He only rates nine players.

Beatty may or may not have finally got a piece of pie: Well, here's something you don't usually see.

[Andre] Smith will be hurt by the fact that, for the second-straight year, there are six or seven very good tackle prospects, and teams would rather have a William Beatty (the UConn kid) with maybe a lesser upside than to take a chance on wasting a pick on Smith.

Apparently someone tried to explain to King that today was not in fact opposite day, but he refused to change his statement. So I guess the Huskies' former sleepy LT is legitimately getting first-round looks.

Still, it's comforting that positive comments about UConn football players haven't lost their back-handed nature, as King shows he's never heard of Beatty by calling him "the UConn kid."

Ah, mediocrity. I feel like a mid-major in your arms.

Butler takes advantage of UConn's proximity to a substantial media outlet: Cornerback Darius Butler will go through the combine gamut tomorrow, but before he did, he made a personal appearance on ESPN's First Take.

In the clip, Butler predicts a 40 time he'll never be able to reach, reminds people that Coach Cal probably should have given him a roster spot over Scottie Haralson and kind of calls out every receiver in the NFL. Good times.