Share All sharing options for: Donald Brown proves to be a prime-cut pastrami at NFL meat market 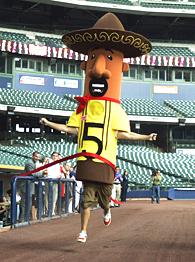 Donald Brown runs the 40 in Indianapolis.

For those who follow these things, Donald Brown, the patron saint of inside handoffs, is apparently kicking all type of tuckus at the NFL combine in Indianapolis.

Some of Brown's highlights from Sunday:

I don't know how that affects his draft status, but it sounds like it would help, no? I'm sort of obsessed with the draft, but I still don't have an opinion that wasn't heavily influenced by Todd McShay. Still, I would think the knocks on Brown would be his straight-line speed and his size. So 4.5 seems pretty good considering his game is more about versatility and being tough in between the tackles rather than breakaway speed.

I watched most of the combine coverage today, and NFL.com's Mike Mayock seems pretty enamored with him; he has him as the second-best back.

Another UConnite doing well is Will Beatty. Although the casual UConn fan has likely never heard of him, Beatty has somehow become a first-to-second-round prospect. Ill Will has all the measureables you'd want from a LT and he surely looks fab in a full under armour compression outfit, but he always seemed too apathetic and sleepy to me to be in the NFL, let alone a first-rounder. But apparently T-Mc is pretty pumped about him, and Beatty placed in the top 10 among offensive linemen in four events.

With DE/LB Cody Brown and CB/WR/RS/BFF 4--> Darius Butler also rated highly, UConn could end up with four players in the first two or three rounds.