What I have learned

Share All sharing options for: What I have learned 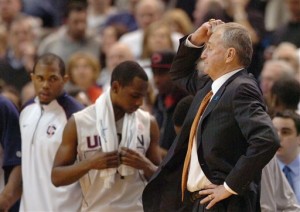 So, UConn lost last night 76-68 to Pittsburgh. I'm still more optimistic than Justin is, but I think his recap came pretty close to hitting the nail on the head. Anyway, I came away with three thoughts from the game, you can see them after the jump.

At the end of the day, there are two important things to remember: UConn was not going to run the table, with or without Dyson; and Pitt is a very, very good basketball team. The Panthers are a bad matchup for UConn, especially with a limited Thabeet and were ranked No. 4 for a reason. No one likes losing, but dropping a close game to Pitt is nothing to be ashamed about.

Ultimately, UConn is probably going to lose two or three more games before the NCAA Tournament, but they are still more than capable of getting to Detroit.