Everybody breathe deep: #1 UConn vs. #4 Pittsburgh

Share All sharing options for: Everybody breathe deep: #1 UConn vs. #4 Pittsburgh 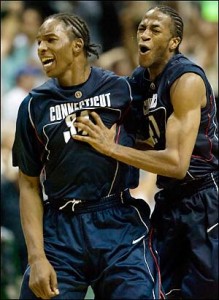 Saturday's 62-54 victory over Seton Hall gave us only a little indication of how the 2008-09 UConn (sans-Dyson edition) team will end up.

And that indication is: Hasheem Thabeet is getting quite good at basketball. And he is mostly the reason why the Huskies stayed atop the national polls for the third consecutive week, an eternity in this tumultuous season.

Now, since a number of caveats apply (Seton Hall is not good, their tallest player was 6-foot-7, many of the big fella's 25 points came off of ridiculous alley-oop dunks), I don't know how much of an indication Saturday's 25-20-9 really was.

Again, the opposition being Seton Hall, this did not matter too much.

Tonight against No. 4 Pittsburgh, UConn will need to get more from its guards, because Thabeet will face off against perhaps his toughest test this season: half-man, half-monster, half-beast DeJuan Blair.

Blair is only 6-foot-7, but he is as strong as an ox that knows the proper technique for creating space underneath the basket.

How important is Blair to the Panthers? Besides his 15 points and 12 rebounds per, Pitt's recent struggles - like losses on the road to Louisville and Villanova - have been directly attributable to Blair being in foul trouble.

According to Basketball Prospectus' John Gasaway, Pittsburgh is a completely different team when Blair is playing free of foul trouble, even more than you might expect.

It's Blair and Thabeet. UConn and Pittsburgh. Winner gets a huge leg up in the race to win the Big East regular season championship. Our (abbreviated) preview of the monster matchup at the Morgue is below the jump.

The place: The Morgue, Hartford

The Vegas favorite: UConn, minus-3.5

Is this school better at basketball than UConn, historically?: No. If you consider UConn to be "nouveau riche," like our Syracuse friends do, you'd need to look up the French word for "even newer rich" to describe Pittsburgh. Ben Howland Jamie Dixon have turned Pitt into a Big East powerhouse, reaching seven of the last eight conference tournament championship games (going 1-2 vs. UConn in that span, by the way).

Check out the game notes: here for UConn and here for Pitt.

Preview: I don't have a whole lot to say as far as previewing the game goes. This game is a toss-up that will depend on how the fouls are called and whether UConn's guards can actually attack the rim and make some outside shots.

And though you may think of Pittsburgh as a "defensive, grind-it-out team" that plays no offense, the BP article linked above also shows that this year's Pitt team has one of the most efficient offenses (in terms of points-per-possession) in recent Big East history. Yikes.

Although UConn's offense this year is fifth on that list, meaning tonight's game should be wildly entertaining. Hopefully, enough shots will fall so that the good guys prevail.

Nevertheless, I think, even without Dyson, UConn is still as good as Pittsburgh. But this is one of those games you just need to sit back and enjoy.

Plus, if the Boneyard is any indication - and it never is - the fans will be extremely pumped and loud for a change.

Media matters: Just a couple links today, since I'll be getting ready to head out soon.

My pick: This game is a little scary. It's the toughest home game on paper that UConn will play this year, and probably the third toughest game on paper overall (at Pitt and at Louisville being the top two).

If Thabeet gets in foul trouble (which he never does but hey...he's due, right?), UConn struggles and Blair and Adrien have a fistfight over whose biceps are larger. If Thabeet plays less than 20 minutes, Pitt wins, 73-63.

If Blair gets in foul trouble, the Panthers struggle a bit on offense, and it also likely means that Kemba and Price are attacking the lane and the rim. Which can only mean good things. In that case, UConn wins 69-64.

If neither (or both) are in foul trouble, I have no idea. What do I look like, an oracle?

Now that I've jinxed the Huskies, I fully await a 20-point blowout Pitt win. You're welcome.