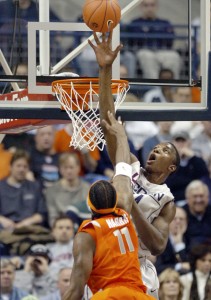 Webster's can take this lead-in:

1. the purging of the emotions or relieving of emotional tensions, esp. through certain kinds of art, as tragedy or music.
2. Medicine/Medical. purgation.
3. Psychiatry.
a. psychotherapy that encourages or permits the discharge of pent-up, socially unacceptable affects.

Yeah. I'll take all of that.

Wednesday night was glorious. UConn beat Syracuse, 63-49, in a tough, sloppy Big East fight in Gampel Pavilion. Hasheem Thabeet continues to be the singular beast of the Big East, A.J. Price and Craig Austrie came up with some big shots and Kemb-awesome Walker hounded the Orange guards all night.

There's not a whole lot for me to say that you can't read in the papers. Slugfest. Turnover-filled. Not UConn's best effort. Sure, whatever.

On the downside, Jerome Dyson looked in serious pain less than five minutes in. A review of the game tape reveals a knee-to-knee collision with Eric Devendorf. Andy Katz reported a bruised knee, with Dyson day-to-day. The Journal-Inquirer adds that there is some concern about a knee hyperextension, but not ACL damage. So that's reassuring, though not as reassuring as seeing Dyson, you know, walk on two legs. For now, we'll hope for the best.

Also on the downside, I swear, the big fella is going to get T'd up sooner or later. I can feel it coming. I'm all for cockiness, but you can't be throwin' 'bows with reckless abandon. The last thing UConn needs would be for Thabeet to get suspended for a game, leading either to a.) Thabeet losing his recent aggressive/confident streak, which I think has been the #1 reason the big man has looked so dominant, or b.) referees beginning to notice that Thabeet does get an unusual amount of leeway because of his one-of-a-kind frame/talents, leading to refs calling him a little tighter, leading some jackass ACC referee to call a pair of chippies in the NCAA Tournament, leading UConn to lose to some no-defense-playing, Nerfy soft team like the two teams that followed UConn and Syracuse on the Worldwide Leader last night.

That was a long sentence.

Anyway, Syracuse Hate Half-Week has come to a glorious and victorious end. Good has triumphed over evil, all is right with the world. UConn is 11-1 in the BEast, a full game clear of Louisville, and Coach Cal is three victories away from a magic round number. On to Pittsburgh Monday night. And to a lesser extent, Seton Hall Saturday at noon.

(Also, I would be remiss if I neglected to thank Brian at Orange:44 and Matt at Hoya Suxa for helping us out this week. It's always nice when we rivals can trade good-natured barbs over this here interweb.)