Share All sharing options for: Crush the Orange: #22 Syracuse at #1 UConn preview 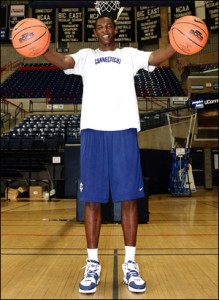 Well, this is it. We've reached the end of Syracuse Hate Half-Week. It will soon be game time in Gampel Pavilion, much to the relief of the guys who have been camping outside the arena since Monday.

This is UConn's biggest rivalry, and if you took part in the Big East roundtable last night, you read my belief that this was the one game in which I'd like UConn to absolutely dismantle the opposition.

Syracuse comes in on a bit of a slide, losing five of seven since a 16-1, 4-0 start. Most recently, the Orange have shown some defensive issues on the road, giving up a c-note to Providence and Villanova.

UConn, of course, has won 11 straight, is a near-unanimous No. 1 team in both polls, and is looking like a Final Four contender, Saturday's struggles aside.

But none of that matters. It's Syracuse-UConn. It's the modern Big East battle for supremacy, it's the reason we've been posting nonstop since Sunday, it's the reason Dick Vitale actually had to consider not going to UNC-Duke for three to five seconds. You gotta be pumped for that.
Below the jump, we'll preview the actual game and give you more than enough links to be prepared for tonight's 7 p.m. tipoff on ESPN.

The Vegas favorite: UConn, minus-12.5

Is this school historically better than UConn at basketball? Hell no. What did you think I was going to say?

Check out the game notes: here for UConn, and here for Syracuse.

The preview: So many storylines to choose from.

There's Calhoun's seven-game wins lead in the Quest for 800.

There's Syracuse's 2-1 record against top-ranked UConn teams (beating the '99 championship team and (of course) the doomed '06 team in the BET).

There's Hasheem Thabeet's emergence as a completely dominant force over the last three games, absolutely shutting down Providence and Louisville's offense, and making a huge difference in the win over Michigan. The big fella is averaging 16 points, 11 rebounds and 7 blocks in the last three games, stretching back to Jan. 31.

There's the fact that Syracuse is in dire need for a big conference win. A win tonight probably puts them in the tournament as a lock.

Actually, from a UConn perspective, this game might also be a secret must-win, too. The Huskies play Marquette and Pittsburgh twice before the end of the year, and UConn can't afford to lose one against a team outside of the Big East's top four if they want to win a regular-season championship.

Tonight, UConn has to take advantage of Syracuse's soft 2-3 zone - softer than anything Michigan threw at UConn Saturday - and Jeff Adrien and Thabeet need to get going early.

UConn's a 36 percent 3-point shooting team, so it will be tough to count on any kind of consistency in that department.

The Huskies should, obviously, have a huge rebounding advantage (Pitt outboarded SU 40-28 and Louisville did so 44-37, to name two) with Thabeet, Adrien and Stanley Robinson inside.

UConn also has the big advantage in depth. Andy Rautins is injured, and Arinze Onuaku is as well, although the latter seems like he'll play. Those are two key starters who will either be out or not at 100%, whereas only Jerome Dyson (who's had a nagging knee soreness and nearly had his chest caved in by Thabeet's foot on Saturday) is hurting, and he's basically fine.

In general, UConn fans should feel good about this matchup. Jonny Flynn (the extra 'N' is for NIT) and Eric Devendorf are both quality guards, but if they follow the foolish Providence game plan, they'll be as ineffective as Jeff Xavier and Sharaud Curry. They'll need to shoot the 3 to win the game.

At the same time, the thing about being No. 1 and in the Big East is that of course UConn won't finish 38-1 (sorry, Porter). You just have no idea who's going to pick you off along the way. Syracuse could very well do it - this is a team that beat Florida, Kansas and Memphis, though none of those teams are as elite as we like to think UConn is this season.

If they did, it would be a huge downer heading into a road game at Seton Hall and a game at the Morgue with Pittsburgh on Monday.

What they're saying: We'll start with the Syracuse blogs.

Next up, the non-Connecticut media has their say:

We'll finish up this preview with a look at a couple stories from the CT papers:

They don't get this game. Not in our house.

Syracuse keeps it close for a long time, until Price and Thabeet make the difference with some big plays down the stretch. And thus completes the perfect half-week of Syracuse hate.