Syracuse does not like playing basketball inside the state of Connecticut 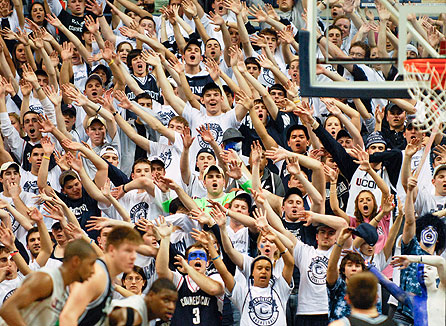 Hey there! Did you know the last time Syracuse beat UConn at home was February 1 1999? That's over a decade ago! And would you care to guess how many times Syracuse has won at Gampel Pavilion? If you guessed zero, then you are correct.

Bonus Fact of the Day: In the 1999 loss, Syracuse only had to play against 60 percent of UConn's starting lineup because current NBA players Richard Hamilton and Jake Voskuhl were injured.

Bonus Fun Fact #2: That 1999 game gave eventual champion UConn the first of two losses they would suffer on the year. UConn would return the favor 4 years later during Syracuse's championship season. The Huskies went 2-0 against the Orange that year, beating them 75-61 in the regular season and 80-67 in the Big East Tournament.