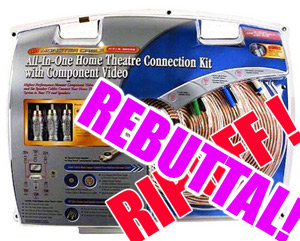 Here at TheUConnBlog, we're very inviting to other teams' fanbases. We like to provide as much perspective as possible, even when it comes from dirty Syracuse fans. Plus, we like content generated by other people. Saves us time.

With all of that in mind, we'd like to proudly present Matt Glaude, Syracuse fan, Georgetown-hater extraordinaire and the proprietor of Hoya Suxa, a site that has made its way into our favorites over the last couple months. You might remember Matt from that time he initiated a tiny blog war. We fought back, as only we know how. And then Matt closed off that memorable chapter in blog history with his own olive branch.

Well, as a special part of Syracuse Hate Half-Week, we invited Matt to share his thoughts on why exactly UConn fans should withdraw their allegiance to the Blue and White, instead focusing their love and adoration on Jim Boeheim's evil minions. (We also offer this opportunity to any other Syracuse fan or blogs out there.) His response is below.

Incidentally, and Porter can correct me if I'm wrong, but I believe this is the second actual "interviewish" thing we've ever done. The only other one I can remember is that time Porter corralled UConn president Mike Hogan.

If you can put this week's animosity aside, please do check out Hoya Suxa. Because we can all agree that Georgetown sucks.

Take it away, Matt:

I'm not talking about Cornelius Vanderbilt "old money," but old enough to have an estate in Greenwich and a first-class table at the local yacht club. A Rolls Royce sits in the driveway and all of its cigars -- hand-rolled with delicate, finely manicured hands -- are lit with $100 bills.

I'm not talking about Pets.com "new money," but rather Tony Montana-like hubris founded on the cocaine and pink button-down shirt boom of the 1980's. A Lotus resides in the 65-door garage and the residence sits on a secluded 143-acre lot sandwiched between Right Said Fred's summer hideaway and recording studio.

The only connection between the two is success; yet, the juxtaposition between blue bloods and nouveau riche creates not just a preference in social hierarchy, but a sustainable inclination to support the legitimate institution of the historic pedigree.1

This theory operates on two levels. First, "old money" is directly responsible for building this country; without the investment of the traditional elite there would be no industrial revolution or other functional development in contemporary social society. Without the Du Pont, Ford, and Rockefeller families, we'd all still be using outhouses and walking to our beet farming jobs, continually wishing that our 32-year life expectancy would quickly come to a conclusion.

The secondary level of the theory considers familial patriarchs. "Old money" is characterized by heralded, almost lionized seniors. They are guiders and governors; true strength, valor, and the epitome of American opportunity.

"New money" is full of international playboys that have little to no respect for the social contract that "old money" invested in. "New money" rents a Four Seasons hotel and dances in the lobby reflecting pool in a drunken stupor. "New money" is brash, bold, and smells of $2,500-a-night prostitutes. There is nothing redeeming about "new money" except the constant media exposure it receives and the cohort's apparent misunderstanding of Greek tragedy and its continued application to ultramodern activity.

And it is under this dichotomy that one should support the Orange rather than the Huskies. Syracuse not only created the social contract2, it pulled it through its infancy and adolescent maturation. It was there at the beginning, flourished through its middle, and is still a significant factor in its current state. Syracuse is the Big East's constant and has been guided through these waters by the prophet James Arthur Boeheim, a man put on this planet to preach the gospel of basketball through the use of the 2-3 zone.

In short, without Syracuse, Connecticut cannot possibly garner any relevance. Connecticut needed to ride Syracuse's coattails in order to become relevant. To root for the Huskies is to inherently support Syracuse, as any success Connecticut achieves is indirectly attributable to the Orange's historic contributions. If you're going to indirectly support Syracuse anyway, why not simply strip away formalities and just purchase a "Real Men Wear Orange" shirt?

Plus, Jim Boeheim speaks in directed, complete sentences. I haven't been able to understand a goddamn thing Jim Calhoun has said in the last 20 years. He's like fucking Mushmouth with a Boston accent instead of a bass guitar.

1The translation from "enlightened Syracuse graduate" to "state school-ese" is as follows: "People hate those new rich dicks; at least the old guy with the crested blazer has very nice teeth."

2Jake Crouthamel, former Director of Athletics at Syracuse, was the chief architect of the Big East with former Commissioner Dave Gavitt.