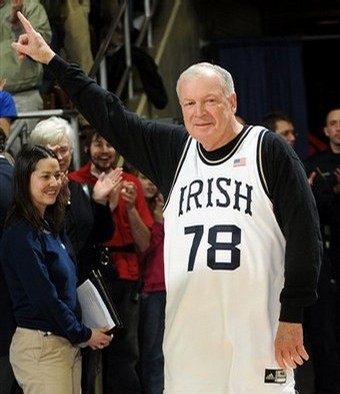 The best part about this is I didn't even photoshop.

I don't think anyone who would argue otherwise.

Don't believe me? Just take a look at what he said about John Calipari last November after losing to Memphis:

"There's been a few things where John's tried to use the media. He may be good at it, but he's not good at it when he's talking about me. My way of business is face-to-face."

Mind you, Calipari left UMass 13 seasons ago. THIRTEEN. And Calhoun is still holding a grudge.

Needless to say, Coach Cal doesn't give when someone starts trippin'.

Well, one Richard "Digger" Phelps had to learn that the hard way. Digger recently fronted on the No. 1 Huskies on a recent ESPN spot, questioning UConn's right to its No. 1 ranking. Coach Cal caught wind of this and, as expected, Coach Cal was not too pleased. So after beating Michigan Saturday, he made sure to keep his pimp hand strong:

"The last thing I heard last night on TV, one of the funniest things, they had an analyst on TV," Calhoun said. "His name is Digger Phelps, who I think coached at one time at Notre Dame. ... But someone asked him a simple question, said, 'Does UConn deserve to be No.1?' I don't know if that's true, but we are 22-1 and we've done a couple things. I had to say that for no particular reason [other than] I feel better. Don't write it. You can write it. I don't care what you do, but I feel so good now, so relieved, because it [angered] me so much. It really did. He was trying to put Wake Forest, begging for Wake Forest to be No.1. Obviously, Wake Forest, I just couldn't understand it."

I think it's safe to say Digger has a bit of egg on his face now. Maybe even an omelet. Or at least some egg noodles or something.

The Deacs are certainly stacked this season, and with wins over Duke before it's yearly mid-season slide and North Carolina, they look like a Final Four team. But really? Come on now, Digger.

I'm pretty sure I heard Digger say the same thing on last week's GameDay, and at the time, it made some sense. But after Wake dropped two straight, I don't know how you can legitimately make that claim. My guess is that, aside from a few club and pickup games at Notre Dame, Digger hasn't watched basketball this week.

OK, anyway. This little spat between Cal and not-so Cal has been brewing since No. 1 UConn played -- and whooped -- Notre Dame about two weeks ago. While providing analysis for the game, the ever-unbiased Digger was wearing a green carnation and received some kind of award for making one Final Four in 20 seasons as coach of the Irish (By the way, when did Notre Dame lose it's fighting spirit and skip right to being just an ethnicity?).

A man of conviction, Coach Cal again had to lay some smack down:

So I think this serves a warning to other coaches: Don't be actin' a fool, because you may just get body slammed.