The more you know: #1 UConn vs. Michigan preview

Share All sharing options for: The more you know: #1 UConn vs. Michigan preview 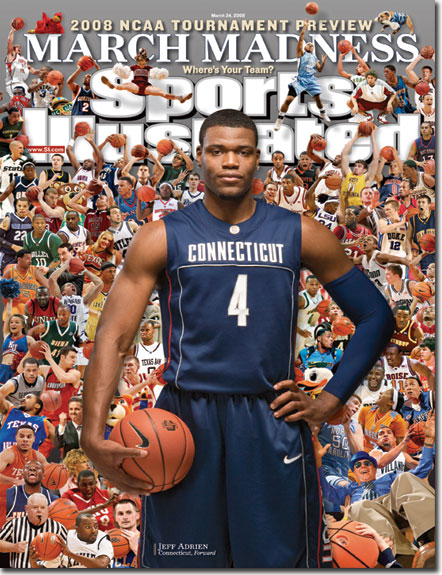 Jeff Adrien, like Hasheem Thabeet, would totally autograph a little kid's hat. He would also then growl at the kid, just to intimidate him.

It's a Saturday in February in Storrs, which can only mean one thing: Big East ACTION! a random basketball game against a middling midwestern team!

Fresh off a refreshingly awesome victory over No. 7 Louisville earlier in the week, the Huskies host the Wolverines of Michigan in a cool little intersectional game at Gampel Pavilion.

Though I have been accused of minimizing the Big Ten's contribution to collegiate athletics, I at least acknowledge that their conference is better than the MAC. Likewise, though the Wolverines (15-8, 5-6) have struggled in-conference, they do have wins over rapidly collapsing Duke and massively underrated UCLA.

The Wolverines are coached by a familiar face, one Mr. John Beilein, formerly of Kevin Pittsnoggle and Mountaineer Man fame. His 1-3-1 defense will be sure to frustrate the hell out of the Huskies until Hasheem Thabeet realizes that he is the tallest player on the floor by seven or eight inches.

It's already Saturday, and there are already people camped out in front of Gampel, so I'll keep this relatively brief and forward you to people who follow the teams (and the numbers) much closer than us three.

After all, if you use numbers, then sure Porter's correct that Kemba Walker isn't the greatest player in UConn history and a retroactive edition to the 1996 list of the NBA's Top 50 Greatest Players. But that would be silly.

Anyway, after the jump lie interesting links of all kinds. Plus, a very special video that will show you exactly how UConn moved into first place in the Big East this morning.

Also, my pick: If I were Lee Corso, I would be a penis. Also, I might say that this game would be closer than the experts think.

But I am not Lee Corso. So therefore, I'll just say that Michigan hits some early shots, looks like it might threaten, but UConn is too much in the end. Hasheem Thabeet's team 85, Robert "Tractor" Traylor's team 70, setting up an apocalyptic four days of nonstop Syracuse hating.

On to the links:

The Marquette loss puts UConn in first place in the conference through at least Wednesday, as they (obviously) are out of conference tonight. What makes this even more fun is that UConn will be taking care of the Marquette women's team tonight in their own building. Bow towards us, Wisconsinites. And take back Brett Favre, please.

The game: Michigan (15-8) at #1 UConn (21-1)
The place: Gampel Pavilion, Storrs
The time: 6 p.m.
The media: TV: ESPN, Radio: WHUS 91.7-FM, WTIC-1080 AM
The spread: UConn minus-16
Series history: Michigan 1-0.
Last meeting: Michigan 62, UConn 45 (Dec. 18, 1939 at White Plains, N.Y.)
Is this school better than UConn at basketball?: Well, possibly. The Wolverines won a national title in 1989, and the Michigan teams of the Fab Five years have a pair of Final Fours have no Final Fours, according to the great and glorious NCAA, and all mentions to the contrary will be met with extreme prejudice. Michigan has three other legitimate final fours. But of course, UConn has its two national titles. Advantage us. Yay us!
Game notes: UConn and Michigan. Michigan's game notes include the retro-cool ESPN2 all-lowercase letters for team nicknames.

Enjoy the game, everybody. Go Huskies.