Those who are about to be mediocre, we salute you

Share All sharing options for: Those who are about to be mediocre, we salute you 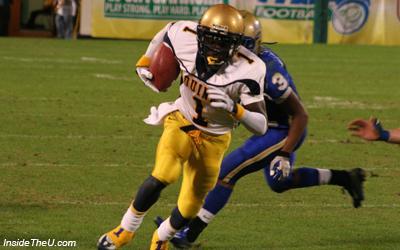 UConn received all 21 of the signatures it expected today, including my new man-crush, Dwayne Difton (I learned how to spell his name correctly!).

Brief thoughts and observations about the class:

Now, the list of recruits, with somewhat uninteresting blurbs pillaged from UConn athletics.

Dwayne Difton (<3), WR (****) – Named first team All-Broward County by the Miami Herald and second team All-Broward County by the South Florida Sun-Sentinel as a senior. ... ranked 13th top recruit in Broward County by Sun-Sentinel…St. Thomas Aquinas finished the season as top-ranked high school football team in the country by USA Today…team was 2007 and ‘08 5A State Champions…had 25 receptions for 414 yards (16.6 average) and five TDs in the 2008 regular season…also had a 34-yard rush during season…caught a TD pass in his team’s 56-7 victory in the 2008 state championship game…had eight receptions for 134 yards and two TDs in three postseason games….had four receptions for 121 yards and a TD in win against Cincinnati Elder in Kirk Herbstreit Classic played at Paul Brown Stadium…team averaged 426 yards of total offense per game… as a junior, had 19 receptions for 276 yards and two TDs…born February 15, 1990.

Malik Generett, WR (***) -- First team all-state in 2008 by Associated Press and Pennsylvania Football News… named 2008 Tri-Player of the Year in the York Adams Interscholastic Athletic Association…named first team all-league twice…selected to play in Big 33 All-Star game…864 receiving yards as a senior captain…team captain…switched from quarterback to wide receiver midway through his junior season…45 receptions for 933 yards and 11 TDs his senior year, an average of 20.7 yards per reception…as a junior, after position switch, had 21 receptions for 420 yards and four TDs…attended same high school as current Husky Zac Zielinski and ’08 grad William Beatty…born October 6, 1989.

Trevardo Williams, DE (***) – Enrolled at UConn in January of 2009…named to the 2007 all-state team by both the Hartford Courant and the New Haven Register…a two-time all-conference selection…on the track, placed second in New England in the 100 meters in 2007...lived in Jamaica until 1999…born December 31, 1990.

Marcus Aiken, WR (**) – Played wide receiver, running back and defensive back during his scholastic career….as a senior, rushed for 1,000 yards and 15 TDs with 19 receptions for 253 yards and three TDs…team went 9-2 overall in ’08…as a junior, rushed for 933 on 122 carries and had 31 receptions for 476 yards….had 213 rushing yards with three TDs in junior year vs. Wilcox Tech…two-time All-Nutmeg conference pick…third team all-state pick by the New Haven Register…team captain…also plays basketball and track…in spring of 2008, won state Class S championship in 300-meter hurdles in record time of 39.15..was also second in 110-meter hurdles…born February 5, 1991.

Michael Box, QB (**) – Played his senior season at Collins Hill and led team to 8-3 record…had school-record 1,561 yards of passing as a senior, including 286 yards in one game for a school record….two-time Gwinnett County Player of the Month…second team all-region…threw for 1,005 and four touchdowns as a junior at Duluth (Ga.) High School and rushed for 540 yards and three TDs…as a sophomore, had 781 passing yards as a sophomore…played in the Gwinnett County All-Star Game…born November 19, 1990.

Chad Christen, K (**) –Named Class AAA First Team All-State and first team All-Mid Penn Conference selection…had a long field goal of 49 yards as a senior and 50 yards as a junior…had seven field goals in both his junior and senior seasons…averaged 42.8 yards per punt as a senior – improving from 38.5 as a junior…in three years as a starter, registered 83 touchbacks on kickoffs….was also team’s starting quarterback as a senior…born September 9, 1990.

Kevin Friend, OL (**) – First team All-Cedar Run District pick as a senior and second team all-region…team MVP and captain…is highly-ranked wrestler in the heavyweight division and is ranked second in the state…born July 12, 1990.

Martin Hyppolite, RB (**) – Set single-season school records as a senior with 1,639 rushing yards with 29 TDs…also is school’s career leader in rushing yards with 2,850 yards and is the leading scorer with 269….had five touchdowns in two different games this year and four TDs in another...team was 8-1 in senior year…had 19 receptions for 318 yards and four TDs as a senior….also return kicks and punts…rushed for 1,013 yards as a junior…first team all-state pick…averaged 9.6 yards per carry as a senior….team captain…named to 2008 All-Scholastic team by both The Boston Globe and Boston Herald… born June 17, 1990.

Jesse Joseph, DE (**) – Enrolled at UConn in January of 2009…was team captain and all-league pick….invited to 2007 Team Quebec camp…team was 2006 and ’07 Bol d'Or Trophy champions, which goes to the winner of the Canadian Prep Triple-A football league champions…from same prep school as current Husky Moe Petrus…a Canadian native who graduated from Northeast Philadelphia High School in 2006…will have five years of eligibility to compete in four at UConn.

Leon Kinnard, ATH (**) – Second team all-state pick as a junior…was honorable mention all-state as a sophomore and senior…as a senior, was named second team all-metro from the Baltimore Sun and All-Baltimore County…first team all-metro and all-county as junior ….as a sophomore in 2005, was 103 for 185 in the air for 1,415 yards and 11 TDs..also rushed for 303 yards and 11 TDs…as a junior in 2006, threw for 1,489 yards with 13 touchdowns as team won state title… team went 11-0 in senior year….team captain…was selected to play in 2008 Maryland Crab Bowl between all-stars from Maryland and Washington, D.C., but missed game because of injury…born February 9, 1991.

Michael Lang, WR (**) – Had 38 receptions for 960 yards and nine TDs as a senior….the yards and TDs were school single-season records….team advanced to state semifinals …had two receptions in state semifinals…team captain…also played defensive back in high school….First Team All-Suncoast by St. Petersburg Times…First Team All-Pinellas County by St. Petersburg Times… as a junior, had a 75-yard interception return for a TD in state playoff game…played in 2008 Florida North-South All-Star Game…born December 24, 1990.