Share All sharing options for: All he was ... was dust in the wind 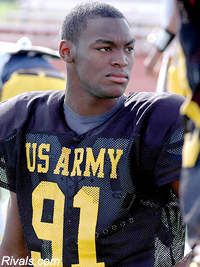 Same old song ... Just a four-star prospect in an endless sea (of two-stars).

After four-star wideout Dwayne Drifton Difton signed with the Huskies two weeks ago, fans got a bit ahead of themselves and began lusting after another four-star, linebacker (and former Mongolian warrior) Barkevious Mingo.

Well, with other schools such as LSU, Alabama and Michigan also reportedly in the mix to land him, Mingo shockingly chose to sign with a team with two national championships the past six seasons.

After the recent coup with Drifton Difton, it looked like UConn maybe, might even a little bit, somehow break away from being recruiting-ranking bottom dwellers (Troy? Really?). I think this did a nice job of bringing some back down to earth (where the 39th-best high school senior at his position is automatically given a starting job).

It seems like Randy Edsall is making some headway on the recruiting trail. With any luck, this may finally be the year where he doesn't complain about the insubstantiality of recruiting services.

Drifton's Difton's ranking may have been bloated because he played for the best high school team in the country and across from Chris Carter's son, but he has four stars! That's four more than this year's senior class combined (you know, minus, like, 50)! With his alleged speed, Drifton Difton should work well in new offensive coordinator Joe Moorhead's hurry-up offense. Although having only 30 inside hand-offs a game will be a bit of a culture shock, it should be fun to see Drifton Difton and some of the other receivers they're bringing in create some type -- any type -- of a passing game.

And it looks like things will get even better from here. Running backs coach Terry Richardson has done a nice job of setting up a pipeline in Florida to mine skill players with SEC speed, and Edsall has been working hard to raise the program's national profile. He has recently done a good job whoring himself out to ESPN, appearing in a creepy pre-taped interview on College Football Live and being used as the focus of a recent Ivan Maisel recruiting story.

So that PapaJohns.com Bowl berth isn't a dream, my friends -- it's a very sobering reality.