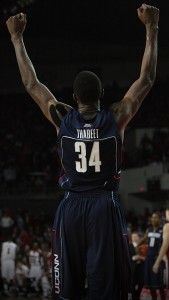 First of all, wow, what a statement win.

Secondly, wow, again. I thought UConn would win, but I was far from sure. Instead of the close game I thought the national TV audience would get, UConn decided to put on a show by stomping the life out of Louisville. The Cardinals played scared and I doubt there is anyone in the country who could have beaten the Huskies the way they were playing last night.

You can find some tidbits for today after the jump:

According to ESPN, Hasheem Thabeet did not allow a single point when he was the primary defender.

Luke Winn over at SI.com wrote about Louisville fans hanging around after the game to get autographs from UConn players. He also (slightly) backed up Calhoun's case for making Thabeet the Big East Player of the year and lauded the effort of UConn's four key guards (sorry Donnell).

Finally, if you have the time, head over to TheVille or visit our friends at CardChronicle. Not only do Cardinal fans seem to be an all around decent bunch, but they've also recognized that the 24-2 free throw disparity was a product of UConn's style and not the refs.

Oh, and CardChronicle poster Sam34gtr deserves credit for the awesome Thabeet photo at the top of the post. Nice work.