Share All sharing options for: Beat The Streak: #3 UConn vs. #19 Notre Dame preview 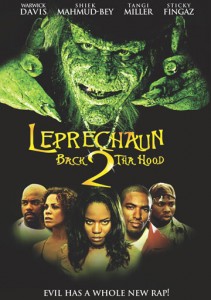 Leprechauns: Evil, or misunderstood? (The answer is evil.)

Tonight is a big night. Jim Calhoun, Hasheem Thabeet and the rest of the bunch are in South Bend, Ind., to take on yet another ranked Big East opponent in front of a national television audience, not to mention hundreds of screaming, red-headed and freckled yahoos who made their presence felt this morning on College GameDay.

And they have reason to scream. The Fighting Irish have a 45-game winning streak in their building, the longest in the country, dating back two years. Most teams just don't win in South Bend.

Most teams don't have a crazy-balanced team featuring a 7'3 center, an All-American point guard and a woyah of a power forward. Just saying.

Still, the Joyce Center has been a house of horrors for UConn, including last year when the Huskies fell behind by 21 and battled back, falling short, 73-67.

The 7 p.m. ESPN clash is arguably the nation's biggest game on a busy Saturday. It, at least, is the only one that will feature the vocal stylings of Duke's No. 1 fan as well as Erin Andrews the world's most attractive sideline reporter this side of Tony Siragusa.

In today's preview, we'll take a look at all the angles, minutiae and chatter, including (but not limited to):

All of that, plus links, analysis, and my pick, after the jump:

What's at stake: Lots, of course.

Luke Harangody (above) averages nearly 25 points per game, despite missing part of the season with pneumonia, probably from fishing as depicted here.

Last year: These two teams played a couple of memorable games last year. As mentioned above, Notre Dame took a 21-point first-half lead in South Bend before UConn came back.

In that game, Thabeet nearly notched a triple-double, blocking 10 shots (most of which from Harangody, forcing the power forward to sit the bench for performance reasons...truly a great moment in recent UConn basketball history). 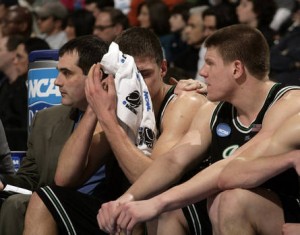 But in the end, McAlarney frustrated the hell out of UConn fans everywhere by scoring 32, including a bunch of big shots down the stretch.

The Huskies would get revenge a month later at Gampel Pavilion, in one of the better game atmospheres I've seen since my freshman year.

Harangody had a monster game (32 points, 16 rebounds), and completely destroyed Thabeet, obviously a worriesome bit of foreshadowing for tonight's game.

But Thabeet would get the last laugh. After Stanley Robinson's 3 gave the Huskies a 79-74 lead with under two to play, Notre Dame battled to get a good look. What happened next, thankfully, has been recorded on YouTube for posterity:

What the media is saying: With help from the always useful New Big East Basketball Report page, a look at the newspaper articles of note heading into tonight's game:

Are the Huskies great? Hell if I know. I doubt they know, either. How they respond to the trash talk, the rowdy crowd and the loads of talent on this Notre Dame team will be very telling as we head into the meat of the Big East schedule.

UConn absolutely cannot afford the slow start they've gotten against (recently) Georgetown, St. John's and Villanova. A slow start could mean an early burial if McAlarney and Jackson are having good shooting nights.

On the other hand, ND has nobody who should be able to guard Thabeet. That particular calculus hasn't worked out much this season, but maybe a little extra motivation (in the form of "Thabeet Can't Spell ESPN" signs) is in order.

If Notre Dame has a good night shooting 3's, they'll probably win. If not, UConn's rebound advantage should translate to a 10-point win. If UConn's backcourt of Price and Dyson can match McAlarney and Jackson, I like the combination of Adrien and Thabeet against Harangody.

Still, me being the eternal pessimist, I'll overestimate the opponents before I overvalue my own team. And with the crazy crowd, UConn's tendency to start slow, and Harangody playing way over his head, I just can't pick the Huskies. Sorry.

Now, a win tonight and UConn is set up to be something really special. If you can win in South Bend, you can win just about anywhere.

I am officially psyched. Go Huskies.

Bonus prediction: Even though we're running a little long, I would like to give a little shout out to the top-ranked and undefeated UConn women, who are fresh off a week that included Geno-Syracuse TripGate and a 30-point rout over supposedly the nation's second-best team.

Actually, who am I kidding. Do I really need to preview this game? UConn wins by 20 or more.

The game you should catch, though, is Monday night's game at Gampel against No. 12 Louisville, which features maybe the country's second-best player, Angel McCoughtry.

Enjoy the games tonight, everyone.