On being the one UConn fan who hopes St. John's doesn't burn to the ground

Share All sharing options for: On being the one UConn fan who hopes St. John's doesn't burn to the ground 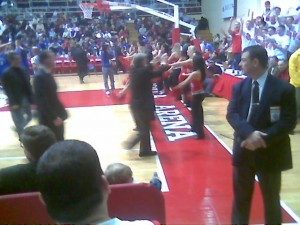 That's Lou Carnasecca at Carnasecca Arena. The photo was taken with Meacham Phone.

Tonight, I'll be making a nice 78-minute train trip from my temporary north Jersey home base over to neighboring New York City. Once there, I will procure what promises to be a cheap and readily available seat for tonight's UConn-St. John's game at Madison Square Garden (7 p.m., ESPN).

As is tradition, I will be wearing my "TRUE BLUE" UConn shirt (as well as like five layers...it is colder than Georgetown fans during last night's GU-Cuse game. Cold as ice.) and looking around for those clad similarly.

And as is tradition, UConn will pound the Red Storm like the miserable, Big 10-quality program they've been since about 2001. And I will be thrilled, as will the large majority of the crowd at MSG. UConn owns that place.

But, deep inside, part of me will feel bad for the Johnnies when they face their inevitable pounding. I actually was a big St. John's fan growing up, they being the only college hoops team of relevance in the NYC area growing up. I listened to their games on WFAN radio, rooted for the goofily-named tandem of Collin Charles and Erick Barckley, not to mention Bootsy Thornton, Marcus Hatten and Omar Cook. (Although by now, so much time has passed that I can't even remember which specific years those guys played.)

I was pissed beyond all belief when St. John's lost to Ohio State in the 1999 Elite Eight, really their one and only title-contending team in my lifetime.

But as the Mike Jarvis scandals turned the program into a total joke, and as Norm Roberts' bludgeoning mediocrity took hold, I gravitated away from SJU. I sort of transitioned over to Seton Hall, who wasn't awful or anything. And then I got accepted to a basketball school, so that was that.

Unlike other schools, for whom I hold bad blood for their suckage during my youth, I never really got around to hating St. John's. Probably because they're going to be a bottom-half Big East team until they get a coach who can recruit the City.

Anyway, that concludes today's tale of Me Boring You With Personal Stories Of My Moderate Like/Dislike Of Non-UConn Teams. Here's a couple of links to tide you over prior to the game, and I expect to have some sort of report Friday: