2008: The year in review or: How Randy Edsall stole Christmas

Share All sharing options for: 2008: The year in review or: How Randy Edsall stole Christmas

Some are calling it the best year in sports ever. But in the nation of Storrs, it wasn't all mirth and holly, chest bumps and thug hugs.

While the men's basketball program reclaimed its spot as a mega-awesome title contender, the women's basketball team continued to whoop and the football team defied mediocrity, UConn sports had its share of ups and downs, roller coaster rides and tea cup go-rounds.

Still, it was quite a year. So grab a fresh glass of champagne and join me, won't you, as we take a look back at some of the sports humans that, for better or worse, made this UConn sports season the year to be here.

Tyler Lorenzen races off to where all the great UConn football player go after college is over: the CFL.

Randy Edsall played musical chairs at QB -- in part to super sike-out defensive mastermind Greg Robinson -- until Lorenzen recovered from a broken wittle foot and the coach felt confident Lorenzen would help stabilize the position because of made-up character traits the QB apparently had.

Well, he surely made a difference: In eight games Lorenzen had 820 yards, a 48.1 completion percentage two TDS and eight INTs.

Coach Cal: Kicked the shit out of cancer for the millionth time.

Weary of the college game, the HOF coach also assumed (by force) the position of UConn general manager, putting dead-weight players such as Doug Wiggins and Curtis Kelly on waivers and signing free agents. A trade for Notre Dame's Kyle McAlarney is currently in the works.

A.J. Price: After breaking every bone in his body twice and fighting adversity like a swashbuckler, Price pretty much carried the team back to awesomeness this past season. With him in the lineup, the Huskies work like a high-end computer (see what I did there?).

Jonathan Mandeldove: What a year for the Dove.

After a breakout freshman season where he averaged 0.9 points in 6.5 minutes a game, the Dove, neither man nor beast, had an equally successful year in the 07-08 season, playing 3.5 minutes a game and scoring 0.3 ppg. Rumors abound about a possible redshirt this season, Coach Cal inexplicably played Big Dove in a preseason game, essentially burning what little chance we had at keeping him around for a fifth year.

But if there's a Coach Cal, there's a way. Even after throwing the Dove some scraps here and there and blowing his shot at a regular redshirt, Coach Cal told reporters in November that the Dove could end up getting a medical redshirt for some ambiguous back injury. Even though no reference had been made to a serious injury up to that point.

And if that wasn't enough, the Dove attempted to break into the music biz:

If you're too lazy to click the picture, here's the write-up from the group "campus dj/looking for a assistant":

if ur looking for a dj for any of ur parties. im looking for assistant for the basketabll seaon. that has flexible hrs and can go to home bball games. dj ill do it for free. u get into all the parties. u got to have good organizational skills and is a cool person to be around. last but not least u have to be a die hard huky fan.

Well, despite being able to defy the laws of spelling and grammar and having a body comprised mostly of gum, the Dove couldn't find too many "die hard huky" fans. Rumor has it Coach Cal put the kibosh on the Dove's fledgling career; those 0.0 ppg were too valuable.

Elena Delle Donne: Hey, I wonder what ever happened to her.

Donald Brown: The Donald had perhaps the best year ever for a Huky. Breaking all kinds of crazy school records, DBro has probably become the Huskies' most accomplished player. Unfortunately, that UConn education isn't doing too much for him: The Donald said he will return next season to lead the team to the Orange Bowl. 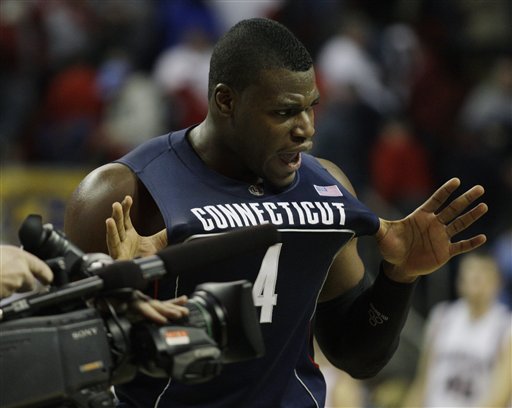 Hasheem Thabeet: Fans rejoiced when he came back for his junior year, then got pissed off when the big fella kept sucking in big games (Really? A sky hook?).

Thabeet continues to defy science as he is the only potential lottery pick to ever have hands made of Flubber.

Gavin Edwards: Finally had a breakout game against Gonzaga. Then took his rightful place next to Donnell Beverly on the bench.

Scottie Haralson: A three-star prospect brought in for the sole purpose of shooting 3-pointers, Rashard Anderson Redux hasn't exactly been a real marksman: Haralson is 3-for-11 behind the arc and has averaged 5.5 minutes per game. It's OK though. UConn has done just fine against the zone without him.

Randy Edsall: Had a pretty good year, although expectations were higher (from some reason), and proved he can keep the Huskies right on the cusp of greatness and just above sucking. His ability to consistently produce mediocrity deserves an opera clap.

Also, after lying to the media, he almost fought Jeff Jacobs in a steel cage match after the Courant columnist called him Pinocchio.

Jerome Dyson: Although Wiggins was pretty much forced off the team after Cognac-gate, Dyson was allowed to stay (because he was the better player of the two).

Dyson has done well this year, leading the team in scoring despite a 1-for-10 performance against Georgetown. If he keeps this up, he may take over Stanley Robinson's spot as the most consistently inconsistent player on the team.

Stanley Robinson: Speaking of "Sticks," the junior has become a fan favorite after sitting out a semester for extremely vague, social/academic/geographic reasons. He came back after working at a 19th Century steel mill and, despite being hyped as the one player who could push the Huskies over the top because of his athleticism, has continued to be inconsistent, which is consistent with his inconsistent past.

The good thing is all the puff pieces about his "struggle" have led to the media embracing his nickname like they are school chums. Also, no one ever mentioned how athletic he is.

Applebee's: Without the lack of a dress code for this fine dining establishment, Plaxico Burress would have never been able to carry an illegal weapon in his sweatpants. Not really UConn related, but I've been trying to use that joke for a while.

Zach Frazer: Had a concussion that no one would classify as a concussion even though he wasn't really good before or after said concussion. Frazer will probably take the reins next season, and after seeing what he can do in relief against Pitt, I'm thrilled.

Andre Dixon: Drank his problems away.

And I'm so excited for '09, here are a few predictions for the new year that I know will come true.

The men earn a No. 3 seed and get bounced in the Elite Eight.

Donald Brown leaves for the NFL: After rushing for more than 100 yards in a narrow win over Buffalo in the International Bowl, Brown pulls a Randy Edsall and tells everyone he always intended to enter the draft but it was a competitive advantage not to say so.

Edsall sheds a tear. Andre Dixon drinks in celebration (and out of routine). 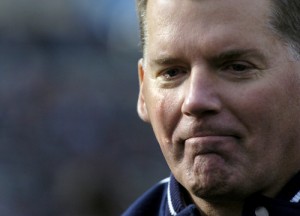 Don't cry for me Randy Edsall. The truth is I never left u.

Andre Dixon is named starter going into summer camp: Sophomore Jordan Todman then leaps Dixon on the depth chart and is used as the feature back the rest of the season.

DJ Dove reaches the big time: After Hasheem Thabeet, Flubber hands and all, leaves for the NBA, the Dove tears up the Big East becomes and becomes a Naismith favorite before leaving mid-season to pursue djing full-time. "I just gotta go with my heart ... and the ladies," he'll say.

The Dove quickly becomes the most sought-after DJ in the world before giving up the gig to host TDL: Total Dove Live.

Super fan Dale Nosel gets a job: No, just kidding. He'll still be unemployed and painting his body with toxic chemicals to go to field hockey games. More QB turmoil: In each game in 2008, the quarterback position will be a game-time decision.

Alex Oriakhi and Jamal Coombs-McDaniel make an impact: In their first seasons at UConn, the freshmen BFF---> begin wearing sweater vests and baking cookies for each other.

Kemba Walker shines: With Price gone, Walker takes the reins and leads the team to at least the Sweet 16. That's more of 2010, but shut up, OK?

The move inspires the team and the Hukies pull out a 10-7 win over Syracuse in an intense battle, where 74 of the 75 plays are inside draws, to finish 6-6 and R+L Carriers New Orleans bowl-bound.