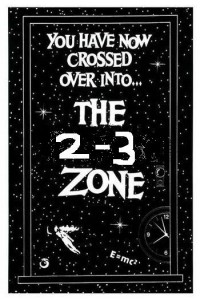 There is a defensive dimension beyond that which is known as man-to-man. It is a defense as vast as space and as timeless as Jim Calhoun's sarcasm. It is the middle ground between the 1-3-1 and the 1-2-2, between gameplanning and superstition, and it lies between post players and the guards who are unable to make good passes to get them the ball. This is the defense which requires imagination to beat, a defense where 9 of 10 shots can go missing without a trace.

It is a defense which we call:

This film is (over)Rated R, children not admitted without parent. Open now at all UConn basketball games until March.