Share All sharing options for: Blaney v. Blaney: Play hard with a vengeance 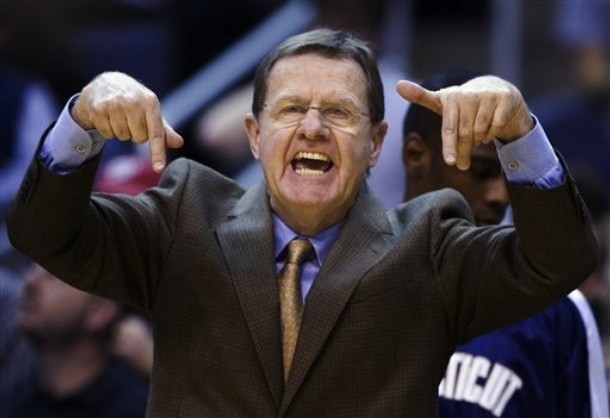 Meet me at the XL Center, it's goin' down.

The place: The Extra Large Center; the Heartbeat, Conn.

What's at stake: Family pride, the Blaney family electric knife at the next Thanksgiving.

Coming off the most exciting win in the past three seasons (which doesn't look as good after this mess), there's not much to wean from this expected blowout. There's always the chance for an upset, especially because the Huskies usually play down or up to their competition and haven't played for almost a week, but I'm gonna go with a no on this one. Even if the benevolent one is calling this a "classical trap game."

Besides, the players got a few days off to be with their families on the days Coach Cal knows matter the most: the ones leading up to a holiday. The team was off for about three days before practicing on both Christmas Eve and Christmas. I'm sure the team had a merry little X-Mas, though, trading gifts by the fire. Afterward, Jonathan Mandeldove roasted a pigeon and sang Christmas carols to the boys. What a crooner, he is. Rumor has it that Stanley Robinson also impregnated someone underneath the mistletoe. Again.

So what will make this game watchable -- well, as far as Connecticut is concerned, listenable (damn you, ESPNU). Well, none other than a good-spirited family showdown, silly.

Beloved UConn associate head coach George Blaney will go up against his son Brian Blaney, a first-year assistant for the Stags, in the first time the two Blanes have ever been on opposing benches.

According to a story from the Day of New London -- a newspaper that can never complain to its reporters about being succinct -- the two Blanes also currently, albeit temporarily, live together in Glastonbury. They apparently are pretty close, too, and tell each other everything. I can just imagine the confessionals they have.

But my fave part of this little family hoedown is that it really has no impact on the game whatsoever. None. Yet, the two Blanes see it differently:

"When the ball goes up, we're going to compete," said Brian, who spent the previous four years as an assistant and associate head coach at Loyola College. "Those guys are striving to be 11-0 and maintain the No. 2 spot in the country. … We're preparing our team to try to go out there and shock the world and try to get ourselves on ESPN with a great upset."

Although it's cute that Brian thinks he's actually competing along with the Stags on the court (*Baby talk*: Look at the little assistant. He thinks he matters. Yes he does), I'm not sure how much either Blane "competes" when the game is going on.

It's not like he'll be banging underneath the boards with his pops, or jumping as high as he can to elbow Hasheem Thabeet's shin. Maybe they'll progressively yell louder things at their players during the game, trying to one-up each other after each howl. Who knows?

Maybe a brawl will break out as tempers flare from this lukewarm in-state rivalry, and graduate student manager Justin Evanovich, whose broham Mike is a junior forward for the Stags (another twist!), elbow drops someone. The possibilities are endless, my friends.

If the Blanes do throw down, I know I'm taking this guy:

He's a monster. And that pencil can take a few eyes out.

Scouting the Stags: Fairfield is probably one of the best worst teams UConn will face this season.

Don't get me wrong, they'll still, as my friend Emmitt Smith puts it, get "blowed out," but they're probably the second best in-state team in a state devoid of any depth behind UConn. The Stags have won seven in a row, they are tied at the top of the MAAC and their only three losses came against Memphis, Virginia Tech and Missouri. So they're really having a good season so far.

The Stags are led by senior guard Jonathan Han, who averages a team-high 12.8 ppg and 6.3 apg, and junior center Anthony Johnson (10 ppg, 8.5 rpg). Their two other forwards average double-digits in points, and 67-year-old guard Herbie "The Love Bug" Allen rounds out the starting five.

Problem is, all five UConn starters average double figures in points, as does Kemba Walker.

Han is their go-to scorer, and one hell of a pilot. He usually leads the team in scoring in almost every game, including an 18-point performance (7-for-12) in a 90-63 opening-night loss to Memphis, and he is a marksman from downtown. He shoots nearly 50 percent from 3, but somehow shoots just 45 percent from the field. Damn mid-majors and their new-fangled 3-pointers. Jerome Dyson, the team's best defender, will likely matchup with him in what should be an interesting battle.

Johnson, though, shouldn't be overlooked. Although he's only listed at 6-foot-8, 215 pounds, he's been a monster on the boards; he's had at least nine rebounds the last three games. Thabeet should take him out of the game, as Johnson does most of his work in the post, but who knows. Thabeet may be getting a hand massage for his dainty, Flubber-esque mitts.

Also, the Fairfield athletics department has a crazy-futuristic new Web site. That's gotta be worth, what, three points? And they're named after both a deer and a bachelor party. Make that four points.

3 Things to watch for:

After sitting out more than a month, Robinson has looked OK so far. He's shown glimpses -- like when he dunked against Stony Brook and every UConn reporter used it as his lede -- but Robinson has also looked tentative and a bit off most of the time, especially with the ball in his hands. It seems like he's hesitant to shoot because he wants to be a team player now (instead of chucking it up the first chance he gets like the past two years) and doesn't feel comfortable yet. He should have a bunch of extra minutes tonight to show what he's got after a few more practices.

After his torrid start, Walker has slowed down considerably and A.J. Price has reclaimed the role of "lead awesome guy." A few bumps in the road were expected with the freshman, but so far the peaks and valleys have been pretty drastic. He was scoring all over the place and pushing the tempo in the beginning, but now he's nowhere to be found; Walker has scored just seven points the last three games. Just like Robinson, though, he should see increased minutes if it's a blowout.

Although WTIC's Wayne Norman does know how to make my heart swoon, I can't wait to hear what nonsensical things Gottlieb has to say as he mans the analyst role alongside John Rooke (who?) for tonight's ESPNU broadcast.

Although he doesn't have as much gel in his hair as Andy Katz, he has the same smooth-guy, know-it-all personality. Be on the look out for stories about how Gottlieb used to play at Oklahoma State, how he almost made it to the NBA, famous players/coaches he knows and for both he and Rooke, like every other play-by-play duo, to call Robinson "Sticks." I love it when the masses adopt a personal nickname. Kind of like how people call Falcons QB Matt Ryan "Matty Ice" like they're pals, and at the same time sidestepping or just not getting the party guy connotation behind it.