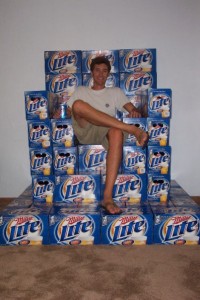 A view inside the Memphis Tigers locker room.

Hey, there. I have brief football news.

Football. Remember? Game with the oblong ball, UConn's not very good at it?

Now, I love bowl season as much as anyone, but I think even I'll be skipping the first day's worth of games in favor of today's fantastic hoops schedule on CBS.

Still, I figure I may as well throw a bone to our Big East compatriots and mention that South Florida is kicking off the BEAST's bowl season in the St. Petersburg Bowl against Memphis today at 4:30 on ESPN2.

So why should you watch this game? Other than the ludicrousness of being a virtual home game - in the sense that UConn playing a bowl game in West Hartford would be a virtual home game - I can't see a reason. And neither can the 11,000 empty seats who, as of Thursday, will have great, unobstructed views of the game.

Luckily, Memphis coach Tommy West is doing his best to drum up interest.
You see, last season, Memphis lost to Florida Atlantic in the New Orleans Bowl. So when a reporter asked if the Tigers would have a curfew this year/had a curfew last year, West responded:

"What hurt us was we weren’t very good on defense," West said. "That hurt us a lot more than the beer we drank. I think us not being any good on defense was why we gave up 44 points, not because we had been drinking all week. We played really good on offense, so the defense must have stayed out late last year and the offense went to bed."

This being a UConn blog, and there having been a mention of the words "beer" and "Tampa", I have a hard time throwing a stone. Plus, Memphis isn't exactly Clean U thanks to their slicked-back-hair, probably-cheating basketball coach.

But yeah, if I'm the president over at Memphis, I'm probably not thrilled that my coach is admitting to the world that his 18-to-22-year-olds actually were out drinking beers prior to the bowl game. Ah well. Hope the boys from Tennessee were enjoying some nice cocktails at [whatever bar I was at that one time I was in Tampa] prior to their game.