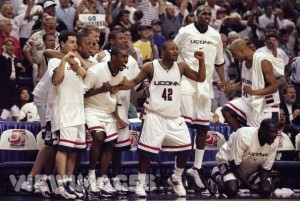 Much like Sugar Ray and Enrique Iglesias, the Huskies were riding high in 1999.

By chance, I happened to pop a tape (that's a videotape, kids...the technology of the 90's) into my VCR because it happened to be labeled "NCAA Tournament Selection Show". The tape was also labeled "SNICK Live!", which should give you an insight into my priorities growing up.

Anyway, as I fast-forwarded through high-larious episodes of Kenan and Kel ("who loves orange soda?" still kills me), it dawned on me that I had serendipitously made a tape of ESPN's 1999 NCAA Tournament selection special.

Of course, as anyone reading this blog must know, this occurred three weeks prior to Trajan Langdon's wacky interpretive dance in the final seconds of the '99 championship game.

And there are some very noteworthy things from this ESPN special: Auburn (Auburn?) was a No. 1 seed in the tournament? The Big 10 gets seven bids? The March 1999 ESPN: The Magazine has the headline "Duke OR Die"? This must be like what happens when you send a Connecticut Yankee back to King Arthur's court. Utter confusion.

But conspicuous by its absence, from a 2008 perspective, is the lack of love for Gonzaga. There's no reason for Digger Phelps to have mentioned them, though.

As strange as it may seem now, the Zags were just another mid-major trying to break through in 1999. The fellas in Bristol seemed to care much more about a 28-2 College of Charleston team that would go on to lose its first-round game, as far as mid-major surprise teams go.

The Bulldogs, however, were a little-noted No. 10 seed, just about 10 days away from first bursting onto the national scene. Gonzaga famously upset No. 2 seed Stanford in the second round and fell five points short of a Final Four, losing to the eventual national champion Huskies in Phoenix.

While the 'Zags have been consistently ranked and filled with ridiculous-looking, talented college players for the last 10 years, that turned out to be the closest the Spokane, Wash., club has gotten to the national title.

This afternoon, these two teams - both with legitimate aspirations for a national title - will cross paths once again, this time in Seattle. After the jump, we'll examine:

Make no mistake, Husky faithful: despite the sheer amount of good-to-very-good teams in the Big East (against whom UConn will play about 15 games), this might actually be the best singular opponent on the Huskies' schedule.

The 'Zags have six large, athletic and efficient regulars who match up with UConn fairly well. If you follow college basketball even a little bit, the top two names should be familiar:

But don't overlook bad matchups galore for UConn's relatively small starting five - 6-foot-11 Austin Daye (13.0 points and 5.9 rebounds per game, both second on the team), and a trio of effective guards - Matt Bouldin, Micah Downs and Stephen Gray - who are all listed at 6-foot-5 or bigger.

Of course, despite what Hasheem Thabeet may tell the ladies in bars (libel!), bigger does not necessarily mean better.

Gonzaga fell to an Arizona team in disarray last Sunday, preventing CBS from advertising a top-5 match-up and, no doubt, sending Billy Packer into unexplained fits of joy.

Of course, if the stat-based fiends at Basketball Prospectus are correct, that was more due to Arizona playing a crazy ridiculous game and shooting the lights out.

I only caught the very end of the game unfortunately, but the box score reveals that this might be the case; the Wildcats were 7-for-10 from 3, got to the free-throw line twice as often as Gonzaga, and the Zags were just 6-for-20 from beyond the arc.

All of which is meant to say the following: UConn will have to play really well to win this game. Gonzaga is a more-than-worthy opponent who is capable of playing with anybody.

Not that the Zags should dominate, or anything.

CHEAP SHOT ALERT: In Thabeet, Heytvelt will face his toughest test yet, other than that time he worked together with the Koopas to stop those pesky Mario Brothers. (Ha! Now that is what we in the business call the "payoff"! You tease a mushroom joke earlier, then you pay it off. This is why Time Magazine named me its 2006 Person of the Year.) 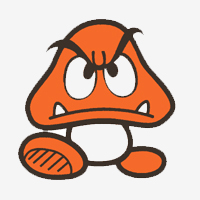 Josh Heytvelt led Gonzaga in rebounds in his sophomore season, and is the team's leader so far this year. Also, since they're not our rivals, I apologize to any Gonzaga fans for bringing up the mushroom thing. I'm sure Josh is a fine, upstanding young man.

The Huskies, after all, they looked impressive against mighty Stony Brook Monday. Today, they'll be playing in front of a partisan Gonzaga crowd who, I imagine, will try to tear them apart with Jesuit teachings.

On the court, Stanley Robinson came back Monday and did his thing, picking up a couple points, a couple rebounds and more importantly, some minutes. If you happened to join us on the liveblog the other day, you would've noticed the various OMGs. His alley-oop dunk Monday (no YouTube, strangely) wasn't quite as good as that time he got posterized, but still: progress.

If Robinson is anywhere near ready to contribute 10-15 good minutes Saturday, the match-up goes in UConn's favor. If not, then Thabeet will have to look like a Player of the Year candidate, and A.J. Price will have to play a February 2008-era A.J. Price game. Even then, these are basically the same two teams that played in the Inferior Garden last year, with the Zags coming on top in a close one.

What that means is anybody's guess, though certainly UConn shouldn't be more than a point or two favorite, if that. Although I'm prepared to accept that Kemba Walker will be the X-factor.

I'll close with my Jay Bilas-style keys to the game, and then my prediction.

My prediction: Pain A great game. These are two teams with plenty of star power and plenty of talent at every position. As always, I'm terrified of UConn's inconsistency rearing its head in front of a raucous, venom-spewing crowd of Washingtonites.

In a game between two evenly matched teams, it might only take one 10-0 run to give one team the ultimate leg up.

And, of course, I'm skeptical of UConn's ability to win a big-time game. And this is the biggest one UConn's played prior to March in a few years.

Combine that with Robinson's rust, the bad matchups at the guard position, and the cross-country trip, and I just can't pick UConn to win. I hope I'm wrong, but hey, there's no shame in losing at a team like Gonzaga. A win would be a feather in the cap, and would really kick off those Final Four dreams. But I'll take a hard-fought, well-executed game that comes down to the final minute.