Share All sharing options for: Petrus a freshman All-American 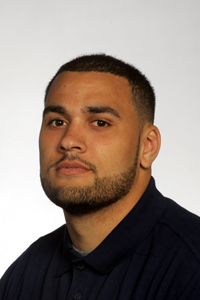 Never heard of him? Well, that's not surprising. Moe is a redshirt freshman offensive guard for the Huskies, and he's apparently pretty good. I still can't tell the difference between a great offensive lineman or a crappy one, mainly because I don't really care. Besides, like everyone else, Mel Kiper forms my opinion for me.

But apparently Moe ain't half bad. Today Moe, 6-foot-2, 276 pounds, was selected as a Sporting News Freshman All-American after being part of a line that helped Donald Brown become the nation's rushing leader and helped the team rank 20th in rushing yards nationally.

Now, I don't know if being named by an all-american by the Sporting News is all that prestigious in the grand scheme of things, and I'm sure most of the reason Moe gets attention is because Brown was so good this year, but Randy Edsall always had glowing reviews of the St. Laurent, Que., native. Most of the local papers have done something on him, and he's even drawing some recruits down from ye 'ol Canada.

Here's a look at the rest of the team: