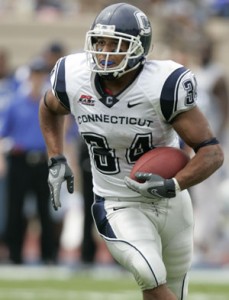 The plan was for Randy Edsall to head down to Atlantic Highlands, N.J. in mid-January and discuss running back Donald Brown's professional opportunities with his parents.On second thought, Edsall might want to just stay at home.

Donald Brown led the nation with 1,822 rushing yards this season.
Brown announced Monday morning that he fully intends to forgo entering the NFL Draft this spring in favor of a return to UConn, even if it meant the large contract that comes with being a first-day selection.

"Yeah, we can explore the options and see what they have to say, but I'm coming back," Brown said. "My goal is to go to the Orange Bowl. That's what I want to do, and that's going to be my last shot."

I mean, see if you can't laugh at the words "Orange Bowl" and "UConn" being put in the same sentence, but still: YAY!

Now all UConn needs to make the 2009 season a special one is some redshirting freshmen to step up on the offensive and defensive lines, some playmaking wide receivers, a quarterback who is allowed to throw the ball, an offensive coordinator with more passing plays than inside-draw plays, and fans who give a damn.

Ladies and gentlemen: we've reached a very important point: this is the happiest I will ever be concerning the 2009-10 UConn football team. Enjoy.