Deck The Halls With Sticks Of Holly

Share All sharing options for: Deck The Halls With Sticks Of Holly 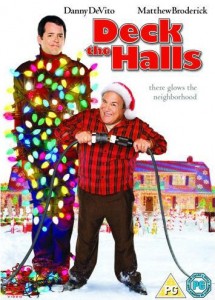 I believe the guy on the left represents Stanley Robinson's struggle to overcome his personal problems.

OK, so that title doesn't make any sense at all. But it was either that or "Merry Sticksmas!" and frankly, I'm lame as hell.

Yes, we're back after a break for exams. Actually, we're already back, and unnecessarily baiting the Syracuse fans. It must be sweeps week on the internet.

UConn fans haven't missed much over the last week, thanks to those pesky finals; a depressing 34-10 football loss to Pittsburgh sapped most of my love for that particular sport; men's soccer got KTFO of the NCAA Tournament against Creighton; women's basketball beat a BCS team by 15 in a game in which they shot about 30 percent; football is headed to the International Bowl to take on Drew Willy's Buffalo Bills Sabres Wings Guys From Buffalo; and that's about it.

(As an aside, to let you know just how STOKED UConn fans are at the prospect of a Jan. 3 bowl game against the MAC champ, I give you the results of this highly scientific UConnHuskies.com poll, through Sunday at 8 p.m.:

Q: How Will You Travel To Toronto To See The Football Team Play In The International Bowl?

C. I am buying tickets, but donating them to UConn to give to charity 2.4%

E. Buying tickets for UConn to give to charity 1.6%

Ouch. Although I voted D out of protest for choices C and E being exactly the same thing.)

One thing you should be excited for, though, is the return of Stanley Robinson. The 6-foot-8 small forward is back from his stint at Willimantic Sheet Metal, where he averaged an inconsistent 11 trucks loaded every day, but showed flashes of greatness.

Depending on whether you started this site or not, you think Robinson is either a) the missing piece between UConn and a national title or b) a guy who rarely played to his talent level AND now hasn't played organized basketball in eight months.

Either way, this UConn team's fortunes do, ultimately, rest on whether Robinson can live up to his hype and give the team a dominant presence on the wing. The 3-guard lineup just wasn't cutting it (A.J. Price is still clearly not 100 percent, Jerome Dyson is still out of control, and Kemba Walker is an uber-talented turnover machine shutupshutupshutup).

After the jump, take a peek at Stony Brook, and the rather repetitive Connecticut media's look at tonight's game against the Glass Joes from Stony Brook:

The site: The Morgue, Hartford

Scouting Stony Brook: Do I really need to? They will be motivated tonight by getting lots of money to take a beating from a highly-ranked team.

Muhammad El-Amin, a 6-foot-5 guard off the bench, is a JUCO transfer who is second on the team with 10 points in less than 18 minutes per game. His bio lists him as the son of Tonja Parker, which I'm assuming is not the guy from the San Antonio Spurs.

Stony Brook's leading rebounder is 6-foot-5 wing(?) Tommy Brenton, with 8.1 points per game. I question the wing designation because in the America East, where eagles soar and where Taylor Coppenrath can be a player of the year, 6-5 is power-forward-type size.

What the Media is saying: Very similar things.

See, the problem with having 15 professional journalists in a very small state covering the same team is that they all have sharp eyes for the news. Take a sampling of today's ledes:

--Matt Stout, of Matt's UConn Blog (reeeeeal original title there, Matt) and the Norwich Bulletin: "The action quickly moved downcourt at the XL Center on Sunday morning, and Charles Okwandu was doing his best just to get a shot up.

In stride but blanketed by a defender, the sophomore center tried to throw a reverse lay-up off the backboard, but the ball bounced harmlessly off the rim.

Suddenly, Stanley Robinson appeared. Leaping from behind a crowd, the 6-foot-9 forward stuffed home the rebound with a two-handed dunk and swung off the rim and over the head of a defender, displaying that freakish athleticism the UConn men’s basketball team has missed."

Thabeet catches it but can’t stuff it home, instead trying to lay it up off the glass. Only the ball rolls around and out of the rim.

Then a familiar yet somewhat forgotten face springs out of the blue. Stanley Robinson, seemingly out of nowhere, leaps to grab the ball with two hands and stuff it home."

--Mike Anthony, Hartford Courant: "Late in practice Sunday at the XL Center, Charles Okwandu got the ball in transition, dribbled into a congested lane and attempted a layup that skipped off the rim and backboard.

Trailing the play, Stanley Robinson rose above a few players, grabbed the rebound, adjusted in midair and dunked with two hands. With one svelte and powerful put-back, Robinson gave the Huskies a glimpse of their new capabilities."

Ahem. Seriously, guys? One of you couldn't use some snappy weather metaphor to describe the season[s] turning? Winter's beginning is just seven days away! Or how about leading off with one of Jim Calhoun's patented former-player comparisons, which I'm assuming happened at some point at practice Sunday:

JC: Yeah, fellas, I tell you, Stanley looks great. And he reminds me of one of my former players, you know, with his skills.

JC: Long, stringy kid from a couple years ago. Jumped out of the gym, a little inconsistent, could shoot the 3. I forget his name. The kid that didn't cover DeJon Jackson against San Diego...left the program? Anyone know who I'm talkin' about?

Anyway, this is what happens when there's no pro sports to distract the Connecticut media.

What was I talking about? Oh yeah. Enjoy tonight's game, the last before what should be an awesome battle against Gonzaga in Seattle Saturday...except that Arizona already beat the 'Zags last night. Oh well.