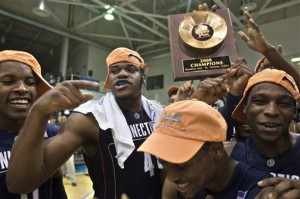 As if winning a gold bowl wasn't enough, the Huskies came away from the Virgin Islands with some amazing hats. ... Oh yeah, they won all three games, too. (AP)

It wasn't the wins over two Top 25 teams, Hasheem Thabeet saying to the infidels, "Hey, I'm tall. Please don't do that," or the disclosure that A.J. Price can, in fact, have his heart ripped out and his legs chopped off and still play.

No, when it comes to the most important thing learned from UConn's winning of a gold bowl in the Paradise Jam, all of that pales in comparison to what really matters.

The true victory came in the postgame celebration after the Huskies dispatched the mighty Badgers and their 50 3-point shooters, because there we learned UConn basketball players love them some goofy hats.

Before winning their prestigious soup bowl, and before Thabeet received his MVP trophy, which looked like one of the framed sports cards I used to get from the basketball Hall of Fame, the players all donned orange, flexfit hats with the Paradise Jam logo on the front.

And although it was Monday, the Huskies decided to make it their own extended version of the freakin' weekend, and let's just say they had them some fun.

As if an incredibly grainy picture, spotty camera work, painfully simplistic and often misshapen graphics and one of the worst announcing duos weren't good enough for the FCS/FSN crew, they then decided to give George Hamilton a mic after the game in an attempt to coax some clichés out of the victorious Huskies.

Taking notice of the ball of goofiness that is tournament organizer Nels Hawkinson, of course in a stereotypically awesome Hawaiian shirt because obviously vacation-goers will all rush down to the Virgin Islands as soon as they see how festive everyone's shirt is! Whoaaaa! the players all jumped around, shouting random things and holding up their index fingers, performing a mock national championship celebration.

At one point, walk-on Johnnie Bird - who was in FCS' starting lineup graphic despite averaging four minutes through five mostly meaningless games this season and looks nothing like Price or Kemba Walker (Pretty sure Price started) - shouted something into the mic, prompting a reaction from the host that seemed eerily familiar.

But the highlight of the night came when G-Ham brought over Coach Cal for some more insight. After some rambling about playing as a team, yada, yada, G-Ham asked Coach Cal why people should come on down to the Caribbean, to which Coach Cal mumbled/yelled something to the effect of, "Get down here now!"