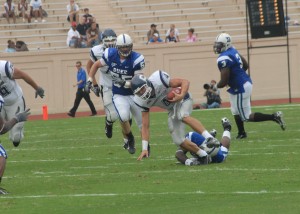 Reach for the stars / and you just might touch them / together there's nothing we can't do! / E-S-P-N U!

What an exhilarating victory for UConn tonight in the Carrier Dome!

Tyler Lorenzen leadershipped the hell out of the Huskies tonight!

I'll never forget how he used his leadership to complete 7 of his 15 passes for 70 yards through the first three quarters, when the game was (marginally) in doubt. Heisman, baby, Heisman.

Seriously - Syracuse's all-star quarterback duo of Andrew Robinson and Cameron Dantley, who could probably both probably be starting for the Indianapolis Colts right now, were so overwhelmed by Lorenzen's intangibles, that they threw nearly a dozen interceptions.

We all know Zach Frazer doesn't have any clue how to hand off to Donald Brown either. It takes YEARS of experience to get competent enough.

I mean, my God: the man is 15-4 as a starting quarterback. FIFTEEN AND FOUR! He's beaten Temple twice! How many quarterbacks in America can say that, other than every quarterback in the MAC, and the guy from Navy?

Hofstra, Syracuse (twice!), mighty Baylor, a 6-6 Louisville team, Rutgers, a 5-7 PItt team, South Florida? Do you think these teams just beat themselves? Well, other than Rutgers and South Florida.

I mean, damn, all the people hating on Tyler just look at things like "being able to throw a fade route," or "being able to look at more than one receiver on a play" or "generally having a sense of timing with any receiver besides the fullback."

Not me, though. I look at things like, "did the defense shut down one of the worst offenses in Division I football?" and "did our Doak Walker-candidate running back have a pretty good day?"

That's how you measure what a quarterback brings to the table.

I mean, the Tyler haters out there need to just calm down. He's already won as many games tonight as Endres and Frazer did in four games against decent-to-good teams, and Lorenzen had an uphill battle with the worst BCS team east of Washington state.

I hope the Orange Bowl will be able to hold the Lorenzen Express, because it is movin' on in, 4.67 yards-per-attempt at a time!