The Thrilla of Vanilla or: Why this Saturday actually means something ... seriously

Share All sharing options for: The Thrilla of Vanilla or: Why this Saturday actually means something ... seriously 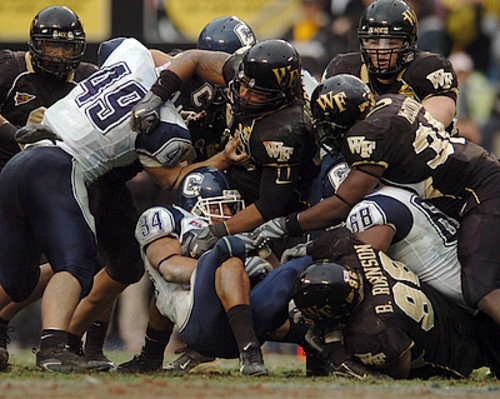 The Huskies are up against a wall, but they still have a shot at a Big East title. Saturday's game at the Carrier Dome will clear things up.

Although homewrecker Pat White almost single-handedly crushed UConn's Orange Bowl chances, and my hopes of filing copy from the beach, there's still a chance for the Huskies to help me fulfill my dream of hanging out with a giant orange.

The Huskies will start their final stretch this Saturday at 7 p.m. in the Carrier Dome to take on Syracuse in the "Thrilla of Vanilla" ©: A clash of two of the least exciting offenses in all of college football.

While the riveting exhibition basketball action -- where, like a 5-year-old boy in the driveway, UConn's highly ranked teams smash various flying objects from Division II-- and watching , you know, teams that play their sport well, have caught Husky fans' attention, there are still three games left to play for the UConn Football Huskies (not to be confused with the UConn Football Giants). And if Herm Edwards has taught me anything, it's to always wear a nice sweater vest, and to play to win ... well you get the idea.

While a game against the mighty 2-7 color Orange may seem to be one of the least exciting matchups of the college football season, and in some ways, it sure is, just think -- at least you don't live in the state of Washington.

Besides, do you really want to travel to Canada in the middle of winter? Once you hit 21, the only enticing things about Canada are Tim Horton's on every block and Don Cherry. But now that ESPN has Cherry doing spot work, I think I can go without a scone for a while.

Hit the jump for other reasons why you should be paying attention the next four weeks, and a look at the Big East from here on out.

So for our cave-dwelling readers, the Big East is bad. So bad, it may be the worst conference in the BCS' 10-year run.

But while the dearth of talented teams leaves quality players unrecognized, it also gives as mediocre as UConn a chance, despite having a .500 conference record.

Take a look at the current standings:

As you can see, even if the Huskies win out, it will still be almost impossible; losses to both a rejuvinated Rutgers team (fresh off an escape from perhaps the worst team in the BCS) and West Virginia muddle things.

But here's the beauty of the Big East, or as I like to call it, Conference USA North: Anything can happen. The way things have been going lately, the team that doesn't lose from here on out will likely win the conference. Two conference loses will probably be the magic number to get a share of the title. And with the conference not picking a sole champion based on head-to-head records, everybody's a winner! Mediocrity's awesome! Yay!

To get a better idea of where that leaves the Huskies heading into their last three game, let's do a little prognosticating for the teams still in the hunt (I'm ruling out every three-loss team):

Remaining Schedule: at L'Ville, at Pitt, vs. USF

You have to think West Virginia, which has the toughest remaining schedule, loses at least one of its next three games. The Mountaineers looked as if they were the class of the conference after stomping UConn, but then fell in overtime to Cincy, the new BCS darlings.

In their 26-23 OT loss, West Virginia was held to just 98 rushing yards and didn't score once on the ground. And even though WVU went off for 216 on the ground against the Huskies, almost all of it came after the half, when UConn's turnovers gave the Mountaineers a short field; eventually, WVU scored too much too quickly and things just snowballed ... again. For the same reasons UConn's win over Cincy wasn't a blowout (20 points came in the fourth quarter, 14 within the last two mins.), neither was the Mountaineers' win at the Rent (Pat White just has that effect on you).

Remaining Schedule: at USF, vs. Army, vs. L'Ville

The Scarlet Knights may have the easiest remaining schedule, simply because they only have two conference games left on the docket. Only problem is, with two Big East losses already, they have little room for error.

South Florida has been on free fall ever since being anointed the (false) idol and saving grace of the conference, but it's hard to believe they're this bad. Although Matt Grothe is Brett Farve with a mohawk, and I mean that in the worst possible way, he's probably the conference's second best QB ... which is like saying he's the second best ugly duckling. Nevertheless, the Bulls still have the best defense and score the most points in the conference -- I honestly don't know how they've fallen this far.

Expect a blowout this weekend in Piscataway Florida, even though they're awful on the road, which means Rutgers falls into the three-loss category.

NOTE: Apologies on all the screw ups.

Remaining Schedule: at L'Ville, vs. Pitt, vs. Syracuse, at Hawaii

Although the Cardinals have proven themselves to be quite the speed bump -- and at the same time, quite pathetic -- this really boils down to a one-game season for Cincy from here on out. The way I see it, the game against the Panthers next week at Nippert Stadium (which sounds like an English cookie) could decide it all.

Now, one might call upon statical evidence to back my prediction -- you know, mention that Pitt is tied for the conference lead in ppg (30.9) and that LeSean McCoy, who has too many capital letters in his name, would be a star in another conference. Or perhaps that Cincy has given up an average of 134. 6 rushing yards the past three games. But since this is a blog, we'll settle this with a good ole fashion mascot battle. Although Cincy's old logo looks more grizzly-esque, and therefore might've had the edge, I'm convinced an actual bearcat -- which I still contend is mythical -- couldn't hold up against a panther, especially one whose been toughened up by an urban Pittsburgh setting.

Remaining Schedule: at Cincy, vs. West Virginia, at UConn

To see my prediction for the Cincy game, see above. But while I have Pitt winning that game, that doesn't mean I see them cruising the rest of the way. I predicted that they'll take out West Virginia in a game that should be very, very close.

So what does that mean? Yes, I think UConn will rain on the Panthers' parade, taking away their sole ownership of the Big East title, but this time they'll actually do something to cause it.

The Huskies are almost unstoppable at home -- it must be the sense of pride they feel playing next door to large guns -- Donald Brown should be able to shred their defense, plus, Tyler Lorenzen should be back by then. And then there's that whole thing about Pitt playing at its worst when its ranked the highest. The Wannstache's coif is frazzled as the Panthers drop it again.

Remaining Schedule: at Syracuse, at USF, vs. Pitt

Now, you would think since I put UConn down here, that would mean I think they'll end up winning a share of the title. Not so fast, buddy. While I see the Huskies pulling off the upset against Pitt, I think they'll at least drop one of their next two. South Florida is a give-in. UConn will lose and lose badly.

South Florida has everything that has proved to be the bane of the Huskies existence: a mobile QB, a staunch run defense and talent -- something even Randy Edsall knows the team doesn't really have. But then again, what does USF have left to play for? Like I said before, three loses is probably one too many, and even if the Bulls lose their next three, they'll still be bowl eligible. And with the way things are shaking out -- and with the way the Big East's bowl bids are situated -- there's not much difference between the Papa John's Bowl and the International Bowl ... except that fact that I enjoy the durrrrrtyness of the durty south.

So let's just say that UConn wins the USF game. And as I explained above, I think UConn can pull out the finale at Pitt. That means Saturday's game against Syracuse might be the most important game of the season.

Now, I'm desperately not trying to pull out the sports cliché that each game is the most important. But with three games left and no room for error, it's unfortunately true. And while it looks like the Huskies stomp the mighty color Orange, they've yet to win in the Dome.

So pay attention to the rest of the season, because it may actually be exciting ... well, as exciting as two of the least exciting offenses in Division I could be.

Shameless plug: If you've made it this far, congratulations! If you like what you've read (and seen) check out our live blog during tomorrow's men's basketball season opener against Western Carolina, where I'll be using the same software seen in love blogs from Dr. Saturday and EDSBS, among others.