Thabeet not so cocky, clarifies comments

Share All sharing options for: Thabeet not so cocky, clarifies comments 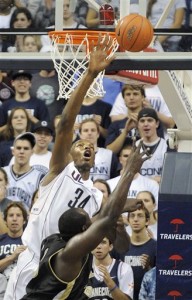 Apparently Hasheem Thabeet isn't as brash as we once thought.

After being quoted by an ESPN the Magazine piece as saying that he wasn't impressed by Luke Haragody and Tyler Hansbrough, Thabeet said yesterday that he was only joking, according to multiple local reports.

Per the Courant: "It was a joke. [Reporter Elena Bergeron] asked me a joke question. She asked me, 'Who are the toughest players you played against?' What I said was, 'Well, I played against [Notre Dame's] Luke Harangody. I wouldn't say he was the toughest player but he was making shots. He's a good player and a good person.' She also asked me, 'What about [ North Carolina's] Tyler Hansbrough?' I was like, 'I didn't play him so I don't know nothing about him yet, but he's a good player. He's the national player of the year, so he plays pretty well.'"

Not sure what exactly happened that led to this whole situation, but in Bergeron's defense, it is hard to understand Thabeet sometimes because of his thick accent and deep voice (which can be heard in their video segment). Perhaps she misunderstood him? Who knows.

Still, it's pretty much a non-issue to begin with. People should speak their minds more often.

In case you hadn't heard, here was his original comment: "I played Luke Harangody and he was not tough," the Thabeet quote read in capital letters. "Tyler Hansbrough? I don't see nothing."

UMass-Lowell Exh. game today at 1 p.m.: Work is keeping from today's exhibition game, but there's some interesting stuff on Mike Anthony's blog, including how Charles Okwandu will play today, and even though Jonathan Mandeldove played Wednesday, he could still get a medical redshirt because he's been dealing with a bad back ... likely from bending down to hug all the ladies.

Also, I'm sure Matt Stout will be live blogging.