Upset Watch: 'Cuse up on Rutgers

Share All sharing options for: Upset Watch: 'Cuse up on Rutgers 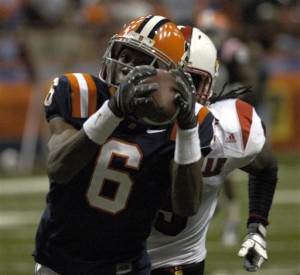 Da'Mon Merkerson and Syracuse are leading Rutgers after one quarter in New Jersey.

UPDATE (10:20 p.m.): Just kidding. The Orange remembered they suck, Rutgers wins 35-17. Can't wait for the Thrilla of Vanilla Saturday. (Note: I will be using that all week now. Thanks, funny bone).

Welcome to the Big East, where mediocrity reigns supreme.

Doug Hogue, who has perhaps the fiercest name in college football, burst off an 82-yard touchdown run and the Orange did something well on special teams -- gasp -- blocking a punt and covering it just before it went out of the end zone.

Syracuse leads the Scarlet Knights 14-0 at the end of the first in Piscataway.

So in case you're keeping track on your "Zany Big East scorecards," sponsored by the Awesome Auger, where zany products -- and rugged, bearded salesman -- live, here's a breakdown of the last few weeks.