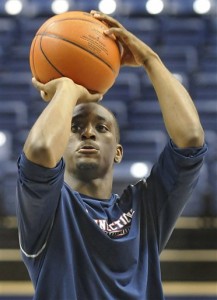 Kemba Walker may be what the Huskies need to live up to their high expectations.

So it turns out this Kemba Walker guy's not half bad, huh?

Walker dominated the court tonight. Although he finished fifth on the team in points, with 10, he was every where all night, and everything he touched turned to gold. He pushes the team unlike any player they have on the roster, and when he's in you feel an excitement that wasn't there before -- one of the fatal flaws many said the 2006 team suffered from.

Jim Calhoun and most of the players agreed with my gushing over the frosh, saying that Walker pushes the ball more and the team plays faster with him in the lineup.

As Jeff Adrien so eloquently put it: "Zoom, zoom."

I'll refrain from making any Zenon the Zequel jokes and just tell you to jump for more from the game.