Share All sharing options for: Okwandu won't play against AIC 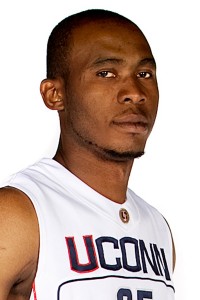 Charles Okwandu is the only player facing right in his mugshot.

While the game will be the first live action for Kemba Walker and Scottie Haralson, fellow frosh Charles Okwandu will be relegated to the bench because of a small snafu with his eligibility that needs to be cleared up.

"We just kind of want to put the pieces together," UConn coach Jim Calhoun said. "Because it's an exhibition game, we're just not going to play Charles tomorrow night. It's basically got to do with a final clarification of everything."

Calhoun said he expects things to be worked out shortly, but Okwandu's status for Sunday's game with UMass-Lowell is still in question.

More from practice, including how Calhoun is a str8 balla, after the jump.

In the future, I'll probably put some stuff up about the opposing team. But for AIC, just know that their biggest player is 6-7.

Check back tomorrow for more, because I'm guessing I'll be really bored during the game/have plenty of time to post.