West Virginia Scored Again, or: How I Learned To Stop Worrying And Love Mediocrity

Share All sharing options for: West Virginia Scored Again, or: How I Learned To Stop Worrying And Love Mediocrity 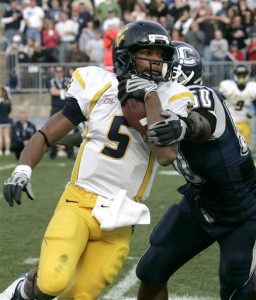 So close, and yet, so un-close.

And so ends UConn's brief flirtation with doing anything of note in 2008.

UConn led 13-7 at the half and, I remarked to people around me, played a near-perfect two quarters.

They held WVU scoreless in the first, including a nice stop on a zone read on 3rd-and-1; UConn's first offensive drive was brilliant, even including passing (!) plays, and rumbling-bumbling-stumbling Donald Brown TD run; the Huskies were moving the ball and making plays, despite the D.J. Hernandez fumble on the first possession.

When West Virginia had 3rd-and-goal from the 24, trailing 10-0 in the second quarter, Rentschler Field was rockin'.

And then Pat White did what he does. Touchdown, WVU. Damn it.

The place got eerily quiet as White crossed the goal line. I don't even remember hearing the usual shrieks that come when the other team makes a big play. Just dead, "can-you-believe-that?" silence.

For 20 minutes or so, UConn had played perfect ball, was leading the Mountaineers 10-0 (a year after losing by 45 points in the Big East title game), and had the crowd in its back pocket. It was going to be our day, finally.

That silence, to me, knocked 38,000 people (minus the rather vocal WVU fans) back to earth. It was as if those 38,000 people just looked on and muttered to themselves, "Oh, yeah. Pat White. Forgot about him."

And when UConn started to shoot itself in the foot by dropping some passes and not taking advantage of field position, that 13-7 halftime lead felt uneasy.

But then Kashif Moore ran a post and caught a gorgeous play-action bomb from Cody Endres, giving UConn a 20-7 lead, momentum, and the knockout blow in a crucial Big East game.

As Randy Edsall said after the game, in what was likely a transparent attempt to lure a New Jersey playmaking WR (in attendance Saturday), our wide receivers are terrible.

But you don't even need Michael Crabtree to make that play. It was a wide open ball into Moore's hands, 5 yards beyond any white jerseys and about 10 from the end zone.

Then West Virginia figured out that UConn was non-committal in the tackling area. WVU's playmakers continued to juke everyone out of their shoes, and Pat White kept throwing that one bubble screen play, and it went from 13-7 to 28-13 in about 10 plays. 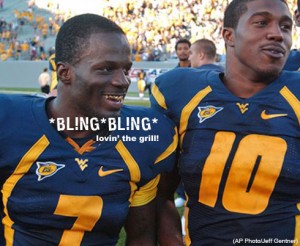 Guard your grill. There's something wrong, we cain't stay still.

And Pat White decided to run for another touchdown just to say he did it, and the game ended 35-13.

Hey, I have nothing against West Virginia. Losing to them (in football, anyway) is much more palatable than losing to some teams. And for those of you who remember that far back, my Mozart-like Unfinished Week of Hate was going to list West Virginia's OT victory over Rutgers as the greatest moment in RU football history.

In the past, I've written about my love love and appreciation for the 'Eers. Their mascot is killer. Their fans and bands are usually among the funniest in the Big East, even if you occasionally get the fans who deal in stereotypes, like common Syracuse or Villanova fans. (By the way, that link is totally not safe for work. NSFW, they call it in this blogosphere.)

Plus, being a football fan first (and thus, always wondering why my two college applications were sent to Syracuse and UConn), I would kill to have the success of West Virginia on the gridiron.

All of this is just a way of saying that at UConn in 2008, I'm now content with a 7-5 or 8-4 finish and a trip to Toronto (which I would make the trip to see) or Birmingham (which, not on your freakin' life). That's a good year, of course, and I'll be happy to see the PapaJohns.com Bowl trophy in the Shenkman Center when I come back for my first Homecoming as an alumni next year.

But it's hard to celebrate that sort of achievement when it is ultimately meaningless in the larger scheme of things.

After the game, I was listening to WTIC's "Husky Talk" radio show, wherein host Kevin Nathan took an interesting call. The guy asked Nathan, WTIC's sideline guy for UConn games, and NBC30's sports anchor, if Randy Edsall could take UConn to the next level.

Nathan said he could, to which the caller responded that it was time for Edsall to justify his $1.5 million and start winning recruiting battles, and to put UConn football in the position UConn basketball was in the early '90s.

To which Nathan got offended as if the caller had insulted his family. He went off on the caller, calling the caller's comparison of Edsall and Calhoun silly. No one, Nathan said, expected Edsall to win a Big East title in year four of the transition to the Big East.

Besides that, it's much easier for Jim Calhoun to recruit a couple five-star players and win a national title than it is for Edsall to recruit 85 scholarship players at the top level.

Now, obviously, Nathan has a point, although pointing to UConn's Big East title-in-name-only isn't going to win him that argument. Co-winning the Big East (after a 66-21 loss to the co-champion) and making the Elite Eight in 1990 are two different issues.

Because UConn probably could have won basketball national titles in 1994, 1995 or 1996, and I'm not sure if UConn football will have a team good enough to actually win a BCS game in that time frame. And that's assuming Edsall follows the Calhoun Path and doesn't bolt for another school.

Not that Edsall can't bring big-time football to Connecticut. It's just that, if
this was supposed to be the UConn's most talented team ever and we're still celebrating moral victories at home against the Big East's best, it makes me wonder.

I dunno, maybe it was Nathan's righteous anger that set me off.

So anyway, where was I? Oh yeah: anything better than 8-4/7-5 would be great, anything worse would leave me just as apathetic as I am right now. (Did you know the No. 2 men's basketball team plays American International on Wednesday at Gampel Pavilion? I'm so there!)

The offense is still pretty bad, as teams are now realizing that not only do you not have to worry about UConn's passing game, you don't even have to cover their receivers.

Except Anthony Sherman, who rox.

But at least we beat Temple!

Two weeks until we go to Greg Robinson's Palace Of Mostly Horrors And Some Wins Over Louisville. Hopefully Randy Edsall won't feel jealous about no longer being at the top of this chart:

I can't contain my excitement.