Butler: "I turned my knee"

Share All sharing options for: Butler: "I turned my knee" 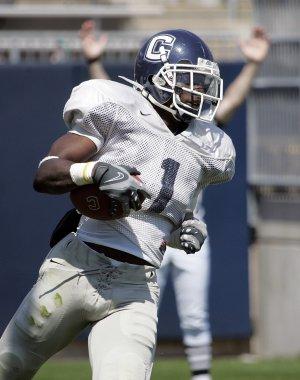 So I had to leave the Rent in a bit of a hurry after the post-game press conference, etc. As I was walking to my car, I just so happened to see Darius Butler, on crutches, signing autographs for a few kids outside the stadium.

I went up to see how he was doing and what exactly happened, and he said he turned his left knee. He wasn't really sure how serious the injury was at that point, but said that he was going to have an MRI today (Sunday), which essentially echoes what Randy Edsall said after the game.

Butler looked a bit down, but considering what happened, it's to be expected. Not sure if that means he'll be gone for the season or back in a day, but you could tell he was feeling the effects a bit mentally.

When he went down, it didn't look good. And as he slowly -- and I mean slowly -- walked off the field, with people supporting him on both sides, everyone around me in the press box was predicting ACL damage.

With only three games left in a successful career that was -- and with any hope could still -- end in a high-round draft pick, I think everyone let out a depressed sigh when Butler went down.

Updates will likely come tomorrow on the situation.