Share All sharing options for: Butler to play primarly on offense Saturday 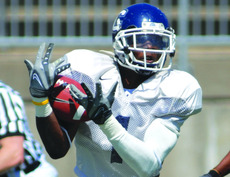 Darius Butler will have an increased role on offense Saturday.

Although he hasn't played on offense a lot over the past few games, Darius Butler will see an increase in offense snaps against West Virginia this Saturday (noon, MyTV9).

According to an article today from the Daily Campus' own Kevin Duffy, Butler will line up at receiver "full-time" against the Mountaineers and play a limited role on defense.

"I always want to be out there [on defense], but this week we need to score a lot of points," Butler said, per the article. "Whatever coach tells me to do, I do. I just want to go out there and help the team the best way I can and if this week that's by playing mostly on offense, then that's what it will be."

Regular start Jasper Howard and Robert "Reggie" McClain will likely get the starts, with Terry Baltimore also pitching in. McClain recorded two interceptions, including one brought back for a touchdown, against Cincinnati.

A potential first-round NFL draft pick at corner, Butler has yet to record an interception yet this season, in part because teams tend to shy away from his side of the field. On offense, the senior has caught eight passes for 107 yards and one of the team's two receiving touchdowns.