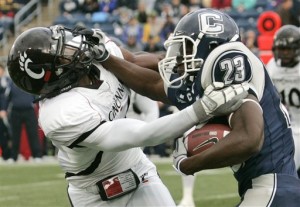 Jordan Todman and the Huskies stiff armed their way to a win over Cincy and are now receiving votes in the AP poll. (photo AP)

UPDATE (11:46): The BCS ratings were released a little while ago and UConn has inexplicably snuck into them. The Huskies sit at the No. 25 spot in the second edition of the poll this season.

A win against Cincinnati Saturday may not have vaulted UConn back into the AP Top 25, but the Huskies are once again receiving votes.

UConn received 30 points in the latest poll, good for the No. 30 spot in the rankings, or fifth among teams teams receiving votes.

ALSO: Within this notebook from Zac Boyer, there's word that Zach Frazer will practice this week and defensive tackle and blogger extraordanaire Rob Lunn is day-to-day with a shoulder injury.