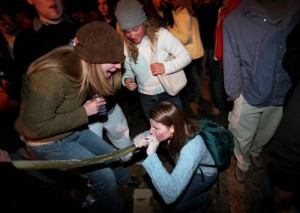 The Hartford Courant has a nice long story up this morning about the shocking, shocking news that UConn students drink. The story is based on an online survey (isn't that just the best kind?) about Spring Weekend that 2,571 students responded to. Of that 2,571, 1,709 students answered a question about blacking out while drinking -- "being conscious, but having no recollection due to substance use" -- and a quarter of those indicated that they did in fact black out during the infamous weekend.

The article has a few high points, such as when Liz Prinze, the acting director of UConn's Department of Wellness and Alcohol and Other Prevention Services wisely pointed out to the Courant that the (online) survey was conducted in March, before Spring Weekend actually occurred. Or when Brandon Busteed, the CEO of a company that works to curb high-risk drinking points out that the survey actually mirrors national trends.

So how do the UConn figures who are quoted in the story respond? Do they acknowledge that anyone with eyes realizes that Spring Weekend is a massive, lawless, drunken embarrassment that would take a serious commitment of time and resources to clean up? Of course not. Instead, they throw around words like "alarming" and "shocked."

Click through the jump to see where the real fun (and apparent news value begins).

"It is alarming and it's a part of the larger culture of UConn," said student trustee Ross Gionfriddo. "I know there are students who go out there with the sole intent of blacking out."

"I was shocked at that," said UConn trustee Louise Bailey, who heads the [board of] trustees' [Spring Weekend' study committee.

"I agree that it's a shocking number," said Julie Elkins, assistant to the vice president for student affairs at UConn. "In some ways, it reminds me of folks who usually drink responsibly, and then New Year's Eve hits and they make choices they normally don't. I think Spring Weekend is their New Year's Eve."

As bad as Spring Weekend is, this type of reaction is even worse. Spring Weekend is a big problem and everyone who has been near the event knows it. The Courant even has a slideshow that accompanies the story showing "Spring Weekend through the years" -- it is filled with pictures of students funneling beer, getting arrested, getting hurt and lighting fires.

What UConn fails to realize is that commissioning empty online surveys and then pretending to be shocked at the predictable results fixes nothing. It just creates a vicious cycle that goes like this: Media points out Spring Weekend is out of control -> UConn officials act shocked, giving media another excuse to point out how out of control Spring Weekend is -> UConn reacts by creating a commission that will invariably recommend creating "safe, sober alternatives" and putting the focus on making the weekend a "UConn-centric event" -> This "new emphasis" curbs violence but does nothing to reduce drinking -> Media acts shocked at drinking -> UConn creates another commission that misses the point by focusing entirely on enhancing the community and not on stopping the systemic problem of binge drinking at the university.

In fact, the only person associated with UConn who comes out of the article looking good is USG President Ryan McHardy. McHardy actually stepped up to the plate and acknowledged the problem.

""Am I surprised? No, and it's unfortunate. That's the behavior I've seen in Spring Weekend," McHardy said.

"There's an expectation that's going to happen," McHardy said. "That, to me, seems to be the No. 1 issue that needs to be addressed."

That is the attitude UConn needs to take. Stop acting shocked -- everyone knows the problem exists. And stop acting like it only happens once a year -- UConn students binge drink every single weekend. The only time the school will make real progress is when they decide to move past being surprised and actually decide to fix the problem.

And just because a picture is worth a thousand words, this sums up the drinking problem at UConn better than I ever could: 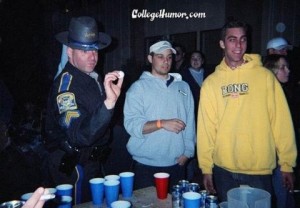