One good turn deserves another

Share All sharing options for: One good turn deserves another 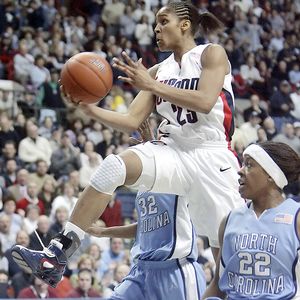 Maya Moore and the Huskies were tabbed the Big East favorites.

The Huskies were picked to finish first in the conference by the annual preseason Big East coaches' poll today in New York, receiving 14 of the 16 first-place votes. Rutgers and Louisville each received a first-place vote, and finished second and third, respectively, in the standings (see below).

UConn sophomore Maya Moore was unsurprisingly named the preseason player of the year, a season after winning the actual award as well as rookie of the year as just a freshman. Renee Montgomery and Tina Charles were also named to the preseason All-Big East team.