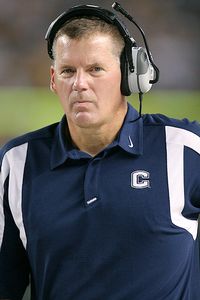 Randy Edsall said he has not been contacted by Syracuse about its expected head coaching vacany.

The New York Times reported yesterday that Syracuse officials have contacted UConn coach Randy Edsall about a potential head coaching opening at the end of the season.

Edsall, however, shot down rumors at his weekly Thursday conference call with local media. Addressing the rumors at the onset of the call, Edsall denied any contact with his Alma mater.

Here's what Edsall said, per the Hartford Courant's Desmond Connor:

"I don't deal in speculation. I just wanted you to know and everybody to know I haven't been contacted by any college, any university, the NFL, any person or people regarding any jobs. End of story."

Syracuse is expected to fire current head coach Greg Robinson, who is 8-34 through four season. Edsall is a former Orange player and assisant coach.