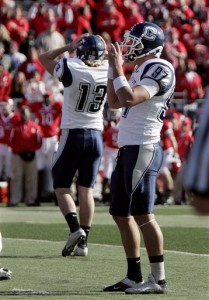 Apologies for the lack of links and notes from yesterday's game. I was too busy numbing the pain.

Actually, that's not true. I just work too many jobs, and it didn't surprise me in the least bit to see UConn lose -- especially in unimpressive fashion. The Huskies are a bad, bad football team. They barely eeked out wins at Louisville and Temple that they should've lost; their receivers are bad; Knute Rockne is calling plays from the grave; despite reports to the contrary, Donald Brown is not Jesus; and the defense can only be described as, "meh."

Let's just hope -- for my sake, at least -- they become bowl elligible. Thanks, Greg Robinson.

I'm short with the banter, because the game can be summed up pretty easily: UConn sucks, Tony Ciaravino blew it. Still, there are some decent basketball tidbits and some notes from around the conference.