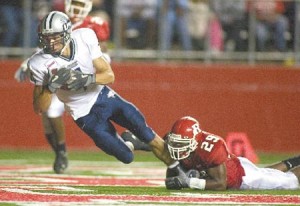 The third in a five-part series.

In recent history, we've seen lower-tier teams catch up with the big-money programs in the BCS. This season, to pick one game off the top of my head, Arkansas State beat Texas A&M. Last year, of course, I-AA champion Appalachain State upset Michigan in the Big House.

As far as competition goes, I think this is a good thing. Many BCS teams hold glorified exhibitions that entertain nobody and deprive the paying customers of a competitive game.

So to see the minnows of lower-FBS and FCS fight back, that's a trend I wholeheartedly support.

And this is one trend, I'm happy to say, our friends in Piscataway were WAY ahead of the curve on.

The Setup: Rutgers wasn't always so bad at football. They were the 1976 version of the 1998 Tulane Green Wave, going 11-0 and being ranked in the mid-teens after playing against a schedule filled with Ivies, Patriot Leaguers, and Yankee Conferenceites.

Obviously, the Knights had a good relationship with some of these Division I-AA schools, and so continued to play them, even after they joined the Big East for football in 1991.

For a while, though, it looked like Rutgers would have been better off in the Yankee Conference.

Terry Shea became the Rutgers head coach in 1996. He had a succesful two-year stint at San jose State, winning Big West championships in 1990 and 1991.

In the early '90s, Rutgers was a respectably mediocre team - not likely to beat any ranked teams, but capable of roughing up teams on a lower tier.

Believe it or not, this continued under Terry Shea.

The guy was just absolutely hated by all five Rutgers fans, as he led the Scarlet Knights to a fanbase-crushing 11-44 record between 1996 and 2000.

And yet, most of his losses were to decent teams. Sure, you'd like the program to maybe win more than a game or two in conference, but you're Rutgers. Whatcha gonna do?

43 losses came to Big East teams, BCS conference opponents, Army (having its best run in years) and Navy (two losses, both decent Navy teams). The other was a 52-24 loss to that unbeaten '98 Tulane team.

So, Mr. Worst Coach Ever schedules tough, and gets roughed up for it.

Greg Schiano, Rutgers Savior, comes in and eases up so that his team can gain confidence. And we all lived happily ever after.

I'll ignore the 20-19 loss in 2001, to a UConn team in the second year of transition from Div. I-AA; a UConn team who started Keron Henry at quarterback (Dan Orlovsky made his first appearance when Henry got injured in this game), and which would go on to finish 2-9.

Rutgers started the season by losing, at home, to Villanova. 37-19. In fairness, it was technically Rutgers' Big East opener.

The following week, Schiano's boys came out fired up...and lost, 34-11 to mighty Buffalo. The 1-11 Bulls, who lost to Lehigh the week before, jumped out a 27-3 lead and sent a half-filled Rutgers Stadium home sad.

The 2002 Rutgers team was one of the worst in Big East history, behind only behind a bunch of Temple teams, and the 1997 and 2001 Scarlet Knights. So let's even cut them a little slack.

So we move on to 2004. Schiano began his fourth year in a big way, knocking off Michigan State, 19-14. It was a sign of the turnaround Schiano was making happen. The fans even stormed the field after that game. Rutgers fans were getting excited. Piscataway was palpably feeling good the week of Sept. 5-10, 2004.

Unfortunately, the good feelings would have to be c-blocked. And when you need one of those, you call guys from New Hampshire. 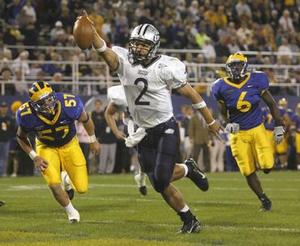 In this photo, green represents air.

This fellow above is Ricky Santos. He would become a Walter Payton Award winner (the I-AA Heisman), following in the footsteps of Tony Romo, Brian Westbrook, Steve McNair, and the Adrian Peterson nobody likes.

In 2004, he was a freshman. In 2004, he was just starting to [mess] [stuff] up. His first order of business, in his very first start was treating Rutgers like Rutgers was UNH's property, as in the critically acclaimed HBO drama, Oz.

Thanks for showing up, Knights.

On an unrelated note, Rutgers finished 2004 at 4-7. A win here, and a win over Motor City Bowl-bound UConn on Thanksgiving Day would have ended RU's 26-year bowl-less streak.

This has been another Great Moment in Rutgers Football History.