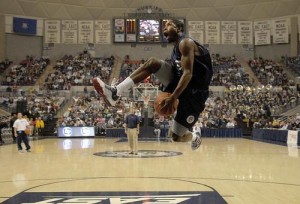 Tonight, UConn will hold its annual Midnight madness First Night, celebrating the first official practice of the basketball season. Once upon a time, say, two years ago, today would have been so much more than just the penultimate day of Rutgers Hate Week. But in this crazy new world in which UConn football is competitive, most people do not even bat an eye at the start of basketball practice.

However, tonight should at least provide one new, different and notable attraction -- the men's and women's teams on the floor at the same time, competing. The teams will not actually play -- instead, the contest will be in the form of a two-ball competition, where a men's player is teamed up with a women's player to try to score as many points as possible in a set amount of time.

The night kicks off at 6 p.m. at Gampel Pavilion and will feature standard fare like a dunk contest, autograph session and team scrimmages. The full schedule is after the jump.