Rutgers Is Wanted (Want-ed!)...Dead Or Alive

Share All sharing options for: Rutgers Is Wanted (Want-ed!)...Dead Or Alive 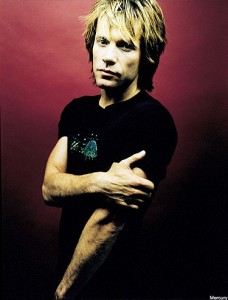 We at TheUConnBlog are nothing, if not intrepid reporters. So naturally, for Rutgers Hate Week, we wanted to go straight to the source. So in honor of my high school journalism teacher, one of the biggest Bon Jovi fans I've ever met, I managed to get an exclusive interview with Jon Bon Jovi himself. We talked about Rutgers, music, and life. Enjoy, after the jump:

KM: Thanks for sitting down with us, Mr. Jovi.

KM: (chuckle) Sure, Jon. So I'll start off with a softball: why don't you tell us about some of your latest projects.

JBJ: Sure. Well, we just finished the tour for our latest album, "Lost Highway," available in record stores everywhere. That was pretty sly, don't you think?

JBJ: That's right. Ten shows, all sold out. It was a thrill. And we closed it out back in July when we sold out Madison Square Garden. We all had a great time.

KM: And of course, your Arena Football team won the league championship this year, right?

JBJ: Absolutely. Go Soul! Ha ha. Yeah, that was great. I'm really happy to be a part of such a great organization. That's a sport that I really think can be one of the quickest-growing major sports in America.

KM: Fantastic. So 2008 has been a pretty good year for Jon Bon Jovi?

JBJ: Absolutely. The band has been great, my buddy Richie [Sambora] is getting over his demons, and I feel like, even after 25 years on the road, there's still only one way for us to go. And that's up.

JBJ: That's awesome. I'm always happy to meet fans, whether they're from New Jersey or wherever.

KM: I've always said "Living On A Prayer" should be the New Jersey state anthem. What'd you think?

JBJ: Ha ha, I wouldn't go that far. I've written better songs, I think. But if Gov. [Jon] Corzine wants to work out a deal, we can make it happen (laughs).

KM: (laughs). Alright, now we should get down to business.

KM: Now, I go to UConn, and we're playing a big football game against Rutgers this weekend. So I wanted to ask you, what's your general opinion of Rutgers?

JBJ: I got nothing against Rutgers. Some of my best friends went there, a lot of my best fans go there now. All in all, it's a pretty cool school.

KM: Really? Because I kind of had a 'hate Rutgers' thing going. You don't have anything bad to say about them?

JBJ: (caught off-guard) Hey, man, again, I got nothing against them. They're a fine school, they represent New Jersey, and I'm all about repping New Jersey. What do you got against them?

JBJ: I mean, I've loved seeing their football program rise over the last few years. Coach Schiano's really got them turned in the right direction. They've had some quality men and football players come out of there.

JBJ: Hey, I own a football team. I realize that some years are just meant to build for the future. If some key guys get good experience this year, it'll pay off down the road. Not every team has to win a championship.

JBJ: You know, I've been a very welcome guest at coach Schiano's house. He's been very warm to me, that's for sure. He's a good man, a good family man. I've got nothing but respect for the university as a whole.

KM: Oh. Well, I didn't want to bring this up, but I read some things, and I thought you may have too.

KM: Well, I read a survey somewhere where Rutgers students agreed that "Have A Nice Day" was your worst song.

JBJ: Wow. That's not cool, man. "Have A Nice Day" is like, my magnum opus. I spent half-a-decade working that sound out with the rest of the band.

KM: Over 40 percent of those surveyed said it was just a "rambling, incoherent version of 'It's My Life'". 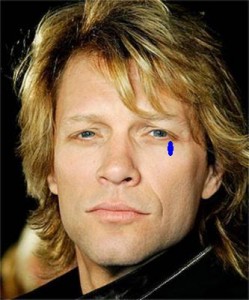 Even when upset, Bon Jovi can only bring himself to cry one single tear.

KM: The other thing I read, is that - you know that guy who's suing you for some crazy amount? Like $400 billion?

JBJ: Yeah. Dude's a crackpot. I mean, I don't think the music industry as a whole has $400 billion lying around, much less me. I mean, I do well, but that's crazy.

KM:I read somewhere that he said he wasn't going to stand for 'you giving New Jersey a bad name.' I guess that's pretty witty and all, what with that being your song, but it sounds pretty personal to me. Do you want to see my notes on the guy? (offers notes)

JBJ: (Reads) Wow. That's just. Wow. I've devoted my life to New Jersey, I raise my kids here, I may want to run for Governor in 2013, and this is how this a-hole treats me? Wow.

KM: So, I don't want to sound like I'm exploiting your emotions, but would you care to offer your opinion on Rutgers now?

KM: Thank you for your time, Jon. Here's to your continued success in the music industry.

TheUConnBlog thanks Jon Bon Jovi for his participation in this interview. His latest album, "Lost Highway," is available in stores everywhere. His music can be heard on North Jersey radio stations such as Q104.3, Z-100, 92.3 K-ROCK, CBS-FM 101.1, 103.5 KTU, 105.5 WDHA and whatever the country music station is.