Share All sharing options for: Another Great Moment In Rutgers Football History 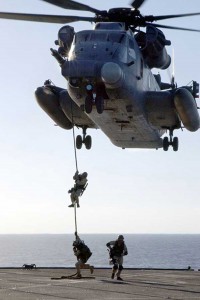 The second in a five-part series.

I feel confident saying this. It's not just because they root for a team whose main color might appeal more to Lenin, or those 208 guys McCarthy had. It's also because they remind me of Red Sox fans, who also hate all that is good about America.

Anyway, this is a special moment: it's the only GMiRFH which features a Rutgers win. Luckily for everyone involved, that was quickly forgotten in favor of the real story.

The Setup: The Scarlet Knights were rolling over Navy at Rutgers Stadium.

Navy's Reggie Campbell took a kickoff early in the fourth quarter, got slammed hard to the turf, and limped off the field.

This gutsy kid, a slotback who already spent three quarters being chased and tackled by gangs of defensive linemen and linebackers, all weighing at least 100 pounds more than him, was then given a dose of Rutgers' student section class.

Reggie Campbell is a senior. After graduation in June he has a five-year commitment to the American military, which, like it or not, is at war.

I don't want to get too much on a high horse here, so let me first say that I don't think this particular blurb is all that bad. I'm a fan of passion in college sports, and I'd be a hypocrite to call Rutgers fans out for that. It's a little messed up, but it's what I expect from my generation.

You all suck, is what I'm saying.

Now, here is where we hit the pause button and do a spit-take:

Toward the end of the second half, Rutgers students in the new bleacher section began to serenade the adjacent section of Navy fans and uniformed Midshipmen.

Hey, I don't want to paint Rutgers kids with one brush (well, I mean, I do; work with me), because this is not exactly a new issue and it wasn't the whole student section. But seriously?

They're the Navy. They will [mess] your [stuff] up. These are not the people you want to make angry.

Set aside, for just a second, the massive disrespect and ignorance for people who will be doing something greater than driving to the White Castle on Route 10 in Randolph after they graduate.

That was the behavior of fans drunk with success. You'll note, this was one of the first games after the Texas Bowl Dream Season, and thus all schools were now subservient to Mighty Rutgers.

I don't recall Notre Dame ever being accused of behavior like this when they regularly won the Commander-in-Chief's trophy in the 90's and 00's.

And so, it's too much to ask that, in a game well out of reach, against an overmatched service academy, the fans have a little restraint. C'mon, my home state already has a bad enough reputation without a couple idiots making it worse.

Now, I'll stop before this turns into Great Moments In Preaching, but I'll just note that the terrorists are this close to winning thanks to Rutgers fans' chanting.

I'll also note that in 2008, in a bit of sweet revenge, Navy ended Mike Teel's Heisman hopes before anyone considered that they might, at one time, begin. The lesson is that Navy will proverbially shoot you in the proverbial face with a proverbial mortar shell if you get all up in its business.

I'm John McCain, and I approve this message.

This has been a great moment in Rutgers football history.